“It works well for the most part as an unlikely but healthy relationship film.“

The actress Christine Lahti does well in her debut feature directing effort, telling a gentle but kooky love story that’s finely written by Jill Franklyn until it’s nearly ruined as it turns to mush in the third act.

The suicidal Jennifer (Leelee Sobieski) is an unloved seventeen-year-old Los Angeles high school graduate. She idolizes the poet Sylvia Plath, and writes poetry from eulogies; dresses in black punk rock outfits; and, has multiple body piercings and tattoos. Life in her dysfunctional family leaves her unhappy. Her falsely cheery and clueless mother (Carol Kane) and her negative stepfather (Michael McKean) can’t connect with her. Her absentee real father (John Goodman) is a self-absorbed aging hippie, who also can’t connect. Her call for attention through self-mutilation is ignored by her family. Needing money to move out in her own apartment, she looks for any kind of work. While at an upscale mall she goes into a men’s clothing store run by the stuffy, middle-aged Randall (Albert Brooks). After initially mocking him, they talk and find they are both very lonely souls who have much in common. When she gets up enough nerve to ask for a job, she’s given part-time work helping out in the stockroom. Before you know it, the odd pair become very close and begin calling each other J and R. We learn he’s divorced. The only woman who seems to care about him is a nurse Patty (Mary Kay Place), who finds time for him only once in a while.

Meanwhile Jennifer is even more desperate and has no boyfriend. Since there’s no one else around to look after them, they begin helping each other. It works well for the most part as an unlikely but healthy relationship film. 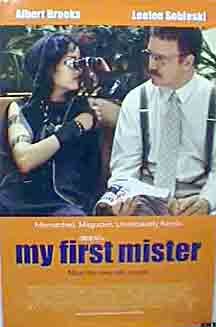