An affectionate and tender family film about a shy boy who gets an exuberant Jack Russell Terrier puppy for his birthday and it changes his life for the better. It’s a decidedly corny and manipulative coming-of-age film that never quite grabbed my attention, but it was sure pleasant enough in a surface way. It tells an old-fashioned story that carefully skirts any controversy. This memoir of Willie Morris’s childhood in the segregated small town of Yazoo City, Mississippi is set during the years of WW11, with the film beginning in the summer of 1942.

It is a human experience drama about childhood innocence that touches on many little things the author reminisces about without him saying much about them that is complex, except showing how he still remembers his pet with the greatest fondness after all these years and speaks of his small-town as an ideal place for a child to grow up in. Willie Morris survived his bookish childhood to win a Rhodes scholarship to Oxford University and became the youngest editor of Harper’s magazine and a distinguished award-winning writer. He gives a lot of credit to his dog Skip for his surviving those awkward and lonely childhood years, especially when three schoolboy bullies picked on him unmercifully. His dog became his best and most steadfast friend, opening his eyes to things he couldn’t see by himself.

Harry Connick Jr. does the voiceover in his scratchy voice exuding nostalgia for a period of time when life was slower than it is today, when kids freely played among themselves, and the streets were relatively safe places.

Willie Morris (Muniz) is a geeky kid who is small for his age and is overprotected by his embittered and standoffish father (Bacon), who lost a leg during the Spanish Civil War and has lost a piece of his heart along with that wound and is only able to offer tough love. He says he took a job as an accountant so he would be sitting at work and people wouldn’t notice that he walks with a limp. Willie’s attractive mom (Lane) is outgoing and is the one who insisted that Willie needed a dog as a pet and gave him that present on his ninth birthday despite the objections of his father, who didn’t think he was old enough to handle a dog.

The coming-of-age messages are presented in a low-key manner as they reflect on a number of things seen through the childish eyes of Willie; such as, the pains of war, the disappointments of hero worship, the importance of friendship and loyalty, the thrill of puppy love, the necessity for community pride, the need for parental love and racial tolerance, and his overall fond memories of childhood.

Willie is upset to learn that his next-door neighbor and his only friend — star athlete and pride of the town Dink Jenkins (Luke Wilson) — is leaving to fight in the European war as a private in the U.S. Army.

Skip helps the befuddled Willie forget about his loneliness by offering him his unconditional love. He also helps him make friends and to see things in his color blind way, as the dog ambles all over town including the colored section where Willie never went before. Just about everyone in town gets to know him through the dog. He will meet the prettiest girl in school, River Applewhite (Caitlin Wachs), who takes a liking to Skip and therefore starts a friendship with him, and even the bullies will stop bothering him after they come into contact with Skip.

When Dink returns to town — not as a war hero, but as a drunk and is rumored to be a coward, he is shunned by everybody in town. But Willie still likes him and remains loyal to him because Dink stood by him in his time of need.

There is also an ill-advised episode that seemed contrived that shows the town meanies, a couple of moonshiners whom Willie and Skip come across in a cemetery. Willie and Skip are threatened by them to not squeal about their hiding place, where they keep their booze in a crypt. Skip while running away from Willie, accidentally manages to get locked in the crypt and is nearly killed by the moonshiners for busting up all their liquor bottles. All of Willie’s new friends ride around town in their bikes looking for Skip and find him in critical condition. In a formulaic scene using every ounce of its energy to tear at the viewer’s heart, Skip wakes up after a life-saving operation and an immense relief comes over the face of Willie.

The film should be enjoyed by children of all ages, as the dog steals the picture with his antics and spinning tricks and playful ways. Adults might be taken in by a sense of nostalgia, about an idealized childhood they might have had or wished for. Those who grew up having a dog as a pet, should respond with approval about how much fun it was to have a dog. But for the film to be better received, it would have needed more drama.

Muniz made for an appealing youngster, Skip stole every scene he was in, and the understated and elegant performances by both Bacon and Lane gave the film some life. If you’re in the mood for a lighthearted shaggy dog story and are not looking for anything deeper than that, then “My Dog Skip” will jump right up on your lap and lick your face. 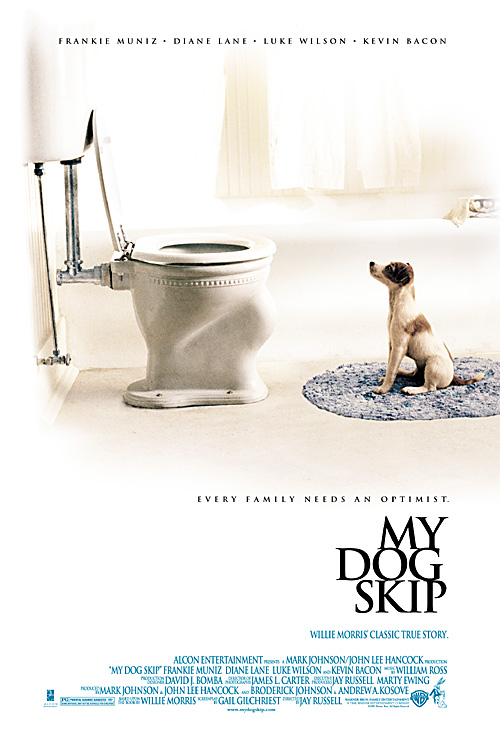