MURDERS IN THE RUE MORGUE

Rejected Frankenstein director Robert Florey (“The Florentine Dagger”/”The Face Behind the Mask”/”The Beast with Five Fingers”) bases this mad scientist tale loosely on a short story by Edgar Allan Poe; it’s changed so much that Poe’s story is hardly recognizable. Florey was influenced by such films as the 1920 “The Cabinet of Dr. Caligari,” a film where his current cinematographer Karl Freund did the lighting. Star Bela Lugosi previously played Dracula but either foolishly turned down the Frankenstein part for this film, supposedly because he didn’t want to be hidden in a makeup disguise and it was not a speaking part, or because Brit director James Whale was made director and opted instead for fellow Brit Boris Karloff. Leon Ames was billed as Leon Waycoff, but by the time he was father to Judy Garland in the 1944 Meet Me in St. Louis he was known as Ames. Charles Gemora, who plays Erik the Ape, fashioned a long Hollywood career out of playing apes. Among the many writers doing the rewrite, count future director John Huston.

In the Paris of 1845, medical student Pierre Dupin (Leon Ames) and his roommate Paul (Bert Roach) are with their girlfriends Camille L’Espanaye (Sidney Fox) and Mignette (Edna Marion) at a carnival. They catch a sideshow attraction where the scientist with a hard to place foreign accent named Dr. Mirakle (Bela Lugosi) exhibits his pet ape “Erik.” The scientist lectures the crowd about his unique take on evolution, saying it can be proven by mixing the blood of man and ape. He also believes that Erik can communicate with him and that he wants a bride. After scaring off the crowd, only the intrepid foursome remain and Dr. Mirakle is of the opinion Erik is attracted to Camille and invites her close to the caged ape. The ape will snatch her bonnet, and when the foursome leave in a huff the scientist has his servant Janos (Noble Johnson) secretly follow Camille home. That same night after witnessing a street fight in his carriage over a woman of the night, Mirakle rescues the woman but snatches her. Back at his lab, he takes a sample of her blood and injects her with the ape serum but finds it’s tainted; she perishes while on the rack. Her body is dumped into the Seine, and it’s noted she’s the third murder victim found there in the last week. Pierre is curious about these deaths and bribes the morgue attendant (D’Arcy Corrigan) for a sample of the women victim’s blood. He learns they didn’t die of drowning, but were injected with a foreign substance he hasn’t been able to figure out. When Camille receives a fancy bonnet sent by Dr. Mirakle to replace her lost one, Pierre out of curiosity visits the scientist on the carnival premises on Rue Morgue where he lives and maintains a lab in a vacant building. Later that evening Mirakle arrives at Camille’s apartment and when her mother (Betty Ross Clarke) won’t let him in, he has the ape push his way in and kill her and snatch Camille for his experiment. At the same time, Pierre figures out the foreign substance in the blood is from an ape and connects the dots that Dr. Mirakle is the murderer. When he arrives at Camille’s flat, he learns he’s too late and after much persuasion convinces the police to go with him to the mad scientist’s lab. There the police kill Janos trying to barricade the door, the ape goes ape and kills his master, and then the ape takes Camille to the roof of the building where Pierre rescues her and kills the ape with the gendarme’s gun.

It’s not a particularly good film, just an ordinary B monster film, but it has style. 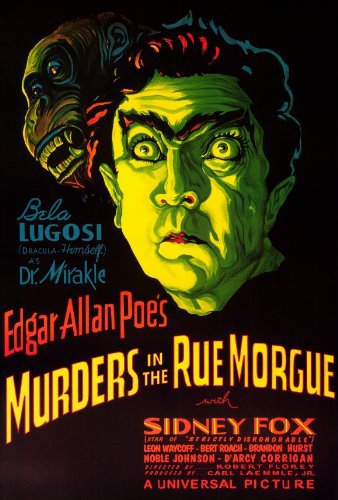