It’s based on the same infamous murders in Le Mans, France, in 1933, that inspired Jean Genet’s 1947 play The Maids, giving rise to Nico Papatakis’s film Les Abysses (1963), the 1974 Christopher Miles film The Maids, the 1986 A Judgment in Stone starring Rita Tushingham, the 1994 film Sister, My Sister directed by Nancy Meckler and Claude Chabrol’s 1995 Le Ceremonie. French director-writer Jean-Pierre Denis (“Field of Honor”/”Adrien’s Story”/”Hideout”) returns to filmmaking after spending the last 12 years as a customs inspector and along with cowriter Michèle Pétin takes another whack at trying to explain the Papin sisters–the more deranged, hostile, dominant older 21-year-old sister Christine (Sylvie Testud) and the innocent looking more submissive 14-year-old Lea (Julie-Marie Parmentier). They were convent girls turned into domestic servants by their self-absorbed impoverished mother, Clémence (Isabelle Renauld), and began an incestuous affair when living together in their employer’s attic room and then bludgeoned their vics to death (gouged out their eyeballs and repeatedly stabbed their wealthy employers, the Lancelin women, to death even though they were treated well in the seven years they were employed there (at least, better than how their previous employers treated them). Though it avoids sensationalism and tries to piece together an historical and psychological perspective for their actions, like the other films it can’t come up with a motive for their horrific crime (probably because their crime is inexplicable, except to be explained as an act of insanity). What it does well is paint the unbalanced girls in a sympathetic light without excusing their brutal act.

It’s based on the minutes of the sensational trial and Paulette Houdyer’s conclusive book L’Affaire Papin. The film touches on the following spicy subjects: incest, psychosis, class warfare, familial discord, a sexually abusive and drunken absentee father, a selfish single mom who wouldn’t let Christine become a nun and follow the career path of her older sister Emilia who was allowed to become a nun after raped by her father, gender oppression, and the brutal butchery of both Madame Lancelin (Dominique Labourier) and her daughter Genevieve (Marie Donnio).

The acting is convincingly macabre, with Sylvie Testud giving an absolutely superb delirious performance. But it’s more a film to ponder things afterwards than to enjoy during its presentation. The subject matter is so disturbingly unpleasant and there doesn’t seem to be a revelation revealed about the girls’ motives except for their alienation and because of their psychological fragility they had no business being maids for the bourgeoisie, work forced upon them by their unfeeling maid mother. The frightened, not all there, girls bonded together because there was no one else there for them and that they led miserable lives of drudgery under such a dysfunctional mom and a depraved dad we never see onscreen, and that their mental health was so shaken that what they really needed was some TLC and help from responsible authority figures. 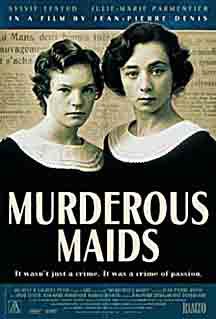