“They don’t make noir films better than this.”

This neglected low-budget B/W noir film from the 1950s is a beaut, an absolutely superb thriller. It reminds me so much of Jean-Pierre Melville’s great existentialist character study film noir called Le Samurai (1967), where the point of the film remains less on the story and more on how the protagonist is suave and calculatingly dispassionate.

“Murder by Contract“ is a gritty depiction of a handsome man, Claude (Vince Edwards), who makes a career move from an honest but poorly paid wage-earner to becoming a high-paid contract killer. He considers his work a business thing, instead of ‘price cutting he does throat cutting.’ The risk is high, but so is the profit. His only personal desire is to purchase a house by the Ohio River, something he could never afford unless he worked all his life and saved. The one who recommends him for the job is a Mr. Brink, who is unseen throughout the story.

Entering Mr. Moon’s (Granger) apartment Claude introduces himself as someone Mr. Brink recommended, even though he has never done a contract killing before he convinces the reluctant Moon that he is a natural for this line of work. Moon makes him sweat for two weeks in his hotel room as he tells him not to leave the room he’ll call him only one time for the job, if he’s out he’ll never call again. Claude exercises when he gets restless waiting for the call, trying to always be cool.

When hired, Claude does a series of minor killings until he becomes noted as a proficient contract killer. We see him use his smarts to kill someone in a barber shop by pretending to be a barber; he pulls the life-support machine off another victim; and, we see him return to Moon’s apartment on a contract assignment and knife him to death. He will work as a hit man for anyone who’ll pay him, as he develops a reputation for being efficient and cool under pressure.

Claude accepts an assignment for the huge sum of $5,000 to go out to Southern California and kill a federal witness in an upcoming mob trial. He learns that the witness is Billie Williams (Caprice Toriel), a woman piano player who is testifying against Mr. Brink. The two men who are his contacts in California, the surly Marc (Pine) and the affable George (Bernardi), want him to get the job done right away as they fear if he goofs up, they’ll get killed. But Claude takes his time, not concerned with the countdown on the two week time period before she testifies. Claude wants to see the Pacific Ocean and the other sites in this sunny paradise, and he also follows the two contact men to see if they are being tailed. His only concern is that it is a woman who is the target not because he cares about women, but because he considers them unreliable as they never stand still. He wants double for killing a woman, but the boys refuse to call the boss and ask, saying that would mean they’ll all be dead after the job.

The job is tougher than Claude realized, as Billie’s house is guarded by the police and she is so scared, she never leaves her house. But he questions a maid she just fired and learns that she watches TV all morning. He attaches an explosive device to the high-voltage wires that will detonate as soon as she turns on the TV, but she uses a remote-control and the explosion doesn’t kill her.

With just 48 hours to go, Claude comes up with another ingenious scheme, he has George shoot a flaming arrow into the outlying brush around her property, which distracts the police. When a woman opens the door to look out of curiosity he kills her with a shot from a high-powered rifle, as he is perched on a hill above her house. But that woman turns out to be a policewoman sent in the last moment because Billie wants a woman around the house. He learns that from a hooker, as he kills some time waiting for the next train back east. It seems that the police tried to cover up the botched hit by telling the papers that she died, hoping it would convince the mob. Claude is ready to give up, saying the woman is a jinx and you can’t go against a jinx or you end up dead.

Warning: spoiler in the following paragraph.

In the suspenseful conclusion the amoral Claude deals with the new situation in his third attempt to kill the witness, in the same professionally detached and coldly objective way he always deals with his problems. But first he must kill George and Marc as he realizes that the boss wants him killed because he botched the job, even though it is not his fault.

This is a perfectly nuanced film with the atmospheric noir cinematography by Lucien Ballard, plus a brilliantly appropriate one-man guitar musical arrangement heard in the background. The film also had a beautiful feel for who the character is and the situation he was in. There were no phony contrivances, as everything felt natural. They don’t make noir films better than this. Interestingly enough, the director and screenwriter never went on to do something even close to the quality this B- film achieved, while this role deservedly catapulted Vince Edwards career into stardom. Martin Scorsese said this was the film that influenced him most when he made “Mean Streets.” 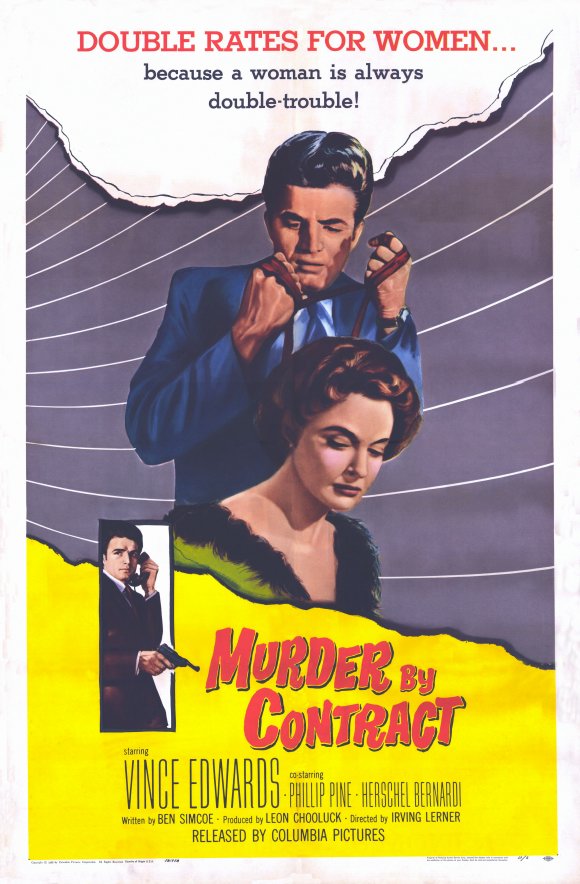