“Plays out as a soap opera melodrama about a gracious family handling the wartime strife with aplomb.”

William Wyler (“The Best Years of Our Lives”/”Jezebel”/”The Heiress”) directs a stirring tribute to homefront courage by the ordinary Brits early in WW II, as the country is trying to survive regular bombings by Germany in what was called the London Blitz. It proved to be the most endearing and effective propaganda film of WW II, and is supposedly moving and meaningful because it was made in the heat of battle and shows no battles or call for vengeance but plays out as a soap opera melodrama about a gracious family handling the wartime strife with aplomb. Winston Churchill is said to have written MGM studio head Louis B. Mayer that Mrs. Miniver is “propaganda worth a hundred battleships.” The film is based on the novel by Jan Struther. It was written by George Froeschel, James Hilton, Claudine West and Arthur Wimperis. Mrs. Miniver was started when many Americans favored isolationism – but during filming Japan bombed Pearl Harbor, greatly changing the American attitude. The film turned out to be a very popular box-office success. Viewed today, the once stirring multi-Oscar winning film (Best Film, Best Director, Best Actress and Best Supporting Actress) seems trite, contrived and outdated. Perhaps if viewed on its release it would have meant something more worthwhile, but it now seems like middlebrow crap. That’s what playwright Lillian Hellman called it, telling that to her director friend Wyler.

It begins in 1939, in pre-war times. Middle-class English housewife Kay Miniver (Greer Garson) happily returns from a successful London shopping trip to her blissful suburban home in Belham, located in the Thames Valley. The kindly old timer station master Ballard (Henry Travers) has graciously named his newly propagated rose after her (later this prize flower will symbolize the beautiful peace-loving culture of the Brits). That night her architect-husband Clem (Walter Pidgeon) owns up to buying a new sportscar and wifey owns up to buying a pricey new hat, which gives them both a big chuckle at their extravagance. It tells in detail how their Oxford-educated son Vin (Richard Ney), the oldest of their three children, who first detested Carol Beldon (Teresa Wright), the attractive granddaughter of the snobbish local nobility, Lady Beldon (Dame May Whitty), is now seriously courting her. Then the war comes, and Vin does his duty by joining the RAF while Clem participates in the evacuation of Dunkirk. Mrs. Miniver continues her gardening hobby and surprisingly confronts the enemy at home by disarming a German paratrooper on her doorsteps. The set pieces include the Minivers in their bomb shelter during a Luftwaffe attack, an annual flower show going on despite the bombing raids, and the vicar (Henry Wilcoxon) reading from Psalm 91 and offering a powerful climactic call to arms from the pulpit of his ruined church as the parishioners sing “Onward Christian Soldiers.”

The story seems slight, the setting seems phony and the idea of this being a typical middle-class family doesn’t seem to hold together when they live in such a lovely grand house, have two domestic servants and never have real money problems over the essentials of living. But as a propaganda film, it has much merit showing the British stiff upper-lip and understatement in the face of danger.

In a gossipy side note, the 33-year-old Garson during filming fell in love with the nine-years-younger Richard Ney, the actor in the part of her grown son. Mayer talked the couple into waiting to wed until the film had played for awhile; their marriage lasted four years. 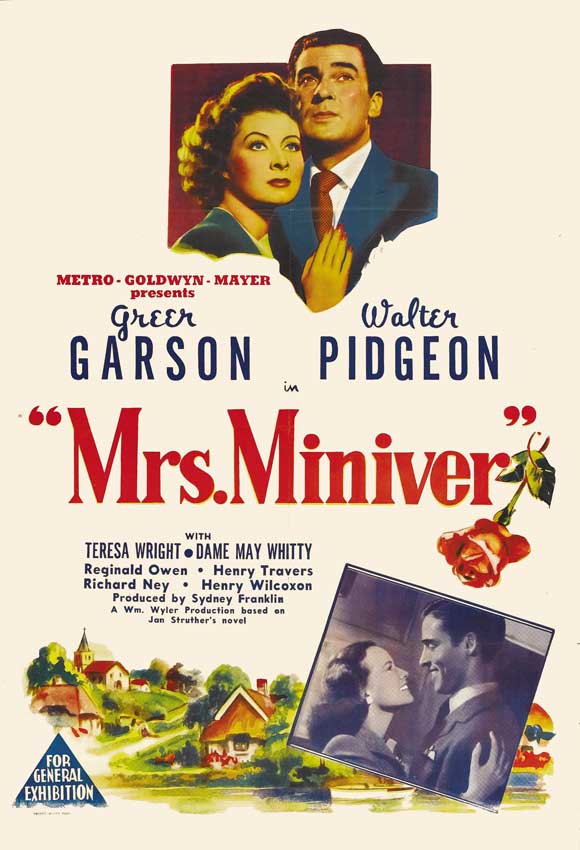