“This discreet drama failed to get to me emotionally.”

A Masterpiece Theater type production, meticulously done as a romanticized Victorian historical period piece, that is based on a true story. It is highlighted by the brilliant nuanced performances by the pint-sized stage actress Judi Dench as Queen Victoria and the more outwardly emotional one by Billy Connolly (best-known for stand-up comedy routines and appearances on English talk shows) as the commoner John Brown, her Scottish manservant. Antony Sher in a supporting role, as the politically adroit Prime Minister Disraeli, is also excellent. Dench was nominated for an Oscar and as a result of the film became sought after in Hollywood; director John Madden would go on to even more success with 1998’s Oscar winning Shakespeare in Love. A production of the same story starring Sean Connery and Elizabeth Taylor was stopped in the late 1960s because it was “discouraged” by the royal family.

Still mourning the death of her husband Prince Albert after three years, the despondent Queen Victoria on a suggestion of one of her servants brings Highlander John Brown to court in 1864 to supervise her horseback riding–and ultimately he gains her confidence so that he has an influence on her life as far as some significant political and personal aspects. Mrs. Brown chronicles a period during which the monarchy was in trouble due to the government’s unpopularity and the Queen’s emotional instability. Victoria was so grief-stricken that she became known as the Widow of Windsor. It was only John Brown who had the balls to talk to her like a woman and remove some of her inward sadness. He attaches himself to Victoria for a mixed bag of motives involving personal ambition, patriotism and genuine concern for his sovereign, and does it despite becoming a man who is teetering on the edge of ridicule and disgrace. The film does a good job in exploring the lonely and isolated Victoria’s need for companionship, and the unorthodox platonic relationship that develops. The two became so intertwined that it generated some persistent and scandalous rumors about the nature of their relationship. The queen is dubbed as Mrs. Brown by the gossips, worried that the commoner has become the Queen’s lover. Meanwhile, the country is questioning the need for a monarchy.

As stagelike perfect as the performances were, the drab tone and the stiff upper lip characterizations by the leads and the lack of my caring if the Queen went down on her John, left me less than amazed at this sophisticated drama about dignity and personal problems of the monarchy. This discreet drama failed to get to me emotionally, even though it was certainly a polished literate work that was done in good taste. 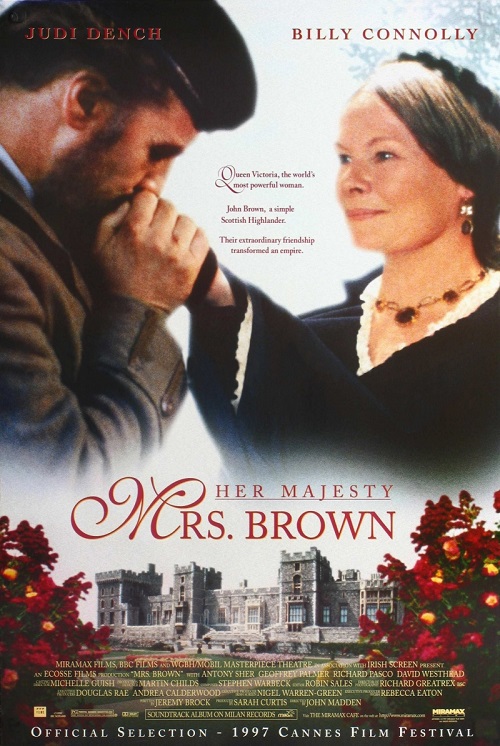