An inspirational British documentary that explores in-depth the Chinese democratic movement that led in May and June 1989 to more than 200,000 students protesting in Beijing’s Tiananmen Square against the totalitarian communist government. Unexpectedly the government troops opened fire on the demonstrators and the massacre left many causalities. The filmmaker’s good intentions are cut into by his weak attempt to shoot unnecessarily for a more stylistic film—yet, the heartfelt story was all that was needed.

Michael Apted (“Nell”/”Coal Miner’s Daughter”/”Enigma”) directs this moving and invaluable documentary that serves as a record to document the tragic events and makes us feel as if we were a witness. It shows the famous photograph of a lone protester facing down a government tank, an image that reflected the courage, unity and spirit of the movement. This essential documentary tells the full-story behind the picture and the bloody price paid by many of the demonstrators, it also tells a mini-history lesson in modern times from Mao’s 1966 Cultural Revolution to the present, and from the leaders own mouths we learn of their strategy and the mistakes they made that many now regret in underestimating the government’s severe response to their popular movement (the students staged a widespread hunger strike across the country that coincided with an official visit from Soviet leader Mikhail Gorbachev and the loss of face suffered by Commie leader Deng Xiaoping over the strike ensured the ruthless crackdown that followed the Russian leader’s departure).

Apted relays to us the events by newsreel footage, dramatic reenactments, and interviews with the participants (who are now mostly exiled in foreign counties where the following met in NYC for a roundtable discussion — Chai Ling, now head of China Dialogue in Washington, D.C., Wang Chaohua, a student of Chinese literature at UCLA, and Wu’er Kaixi, a student at Dominican College in San Rafael; another student leader, Wang Dan, is still in Beijing in a secret location where he was interviewed). The core of the film tells of events through the eyes of student leader Li Lu (at the time of filming he was 29 and a Columbia University law student).

The title is based on a Chinese parable told by a farmer who daily had to cross a mountain to get to his fields. He holds out hope that he can move the mountain bit by bit with the help of his children and the generations to follow. That just might be the lesson learned from the Tiananmen Square bloodbath. 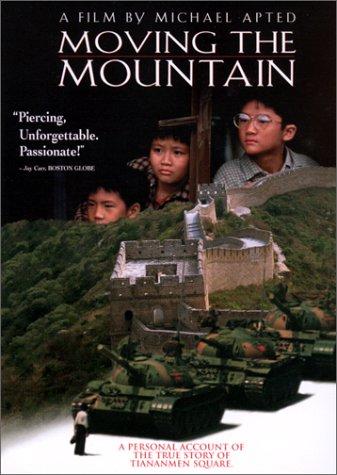