“Glum WW II drama that takes special care in showing the sensitive relations between the Chinese and American allies fighting the Japanese.”

Daniel Mann (“The Teahouse of the August Moon”/”Strategic Air Command”/”Willard”) directs this glum WW II drama that takes special care in showing the sensitive relations between the Chinese and American allies fighting the Japanese. In particular it tries to tackle cultural misunderstanding and racial prejudice between the American soldiers and their Chinese allies, which slows down the action and in the end leaves the film feeling flat. Though it’s almost worth watching for a possible interracial romance between the cynical and unsympathetic James Stewart character and the compassionate character played by Chinese actress Lisa Lu. It’s based on former Time war correspondent Theodore H. White’s 1958 book and scripted by Alfred Hayes. White was highly critical of the Nationalist government, whom he called-out for being corrupt and inefficient, and also warned of the growing threat of Communism. The idea for the film was based on Frank A. Gleason, the head of the demolition crew depicted, who was the uncredited adviser for the film.

It’s set in China (with the rugged terrain around Tucson, Arizona, used as a substitute) during WW II, in 1944, the last days of the war. It follows the ambitious but inexperienced US Army Major Baldwin (James Stewart) and his engineer demolition team of eight men who are ordered by General Loomis to destroy all bridges and roads needed by the Japanese in an attempt to slow them down. It’s a rear-guard action that needs the cooperation of the Nationalist Chinese army. Baldwin finds the assignment ironic since in civilian life he was an engineer who built bridges. After blowing up an airstrip, Baldwin and Collins (Glenn Corbett), the team’s translator who studied Chinese at Columbia and feels empathy with the Chinese, seek permission to blow up a bridge from Col. Li, the Chinese commander of the region. Li assigns Col. Kwan to accompany Baldwin and, Madame Sue-Mei Hung (Lisa Lu), the attractive American-educated widow of a Chinese officer, also joins them for the journey to Kwei Yang. Things take a few nasty turns however as it’s learned by a Chinese deserter that Li has cowardly fled into the hills with his men and thereby left his outpost vulnerable to the oncoming Japanese. The major now decides to blow up the road and tries to bribe with rations the impoverished Chinese peasants, who don’t understand why the Americans want to blow up their infra-structures. But it backfires, as Collins is trampled by a swarm of starving Chinese who run to grab the rations. The cynical major has no use for the Chinese, but believes in the mission. While Sue-Mei counters that no one can help China because it’s a country without order. The determined Baldwin decides to blow up the munitions dump, and assigns Miller to drive the ailing Lewis and Collins’ body to Kwei Yang. After blowing up the dump, the major spots the bodies of Collins, Miller and Lewis on the road and figures out that Chinese bandits raided the truck. With that, the irate major seeks revenge and fails to listen to Sue-Mei’s plea that revenge will solve nothing, as he destroys the Chinese village with explosives. When they reach the next outpost Sue-Mei refuses to go further, even as the major apologizes. Baldwin then radios his headquarters to report that the dump has been destroyed and is congratulated for a job well done. 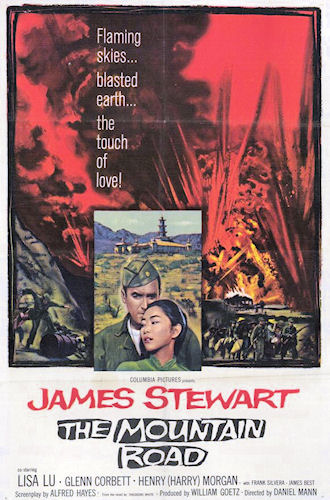 WILD BOYS OF THE ROAD