For English director Lynne Ramsay’s follow-up to “Ratcatcher,” she tells a more modern tale about youthful alienation rather than one etched in the 1970s. “Morvern Callar” is based on the novel by Alan Warner and it’s a loosely conceived narrative that hardly holds together as a full-blown story. Instead through a minimum use of dialogue and in a surreptitiously visual manner, follows its photogenic saucer-eyed and crooked toothed star Samantha Morton around as she tries to get her act together and change her life amidst all the desolation she’s surrounded by in the couple of weeks the story zeroes in on. Morton plays the self-centered cockney lassy living in the Highlands of western Scotland, the titular character possessed with the odd name.

The pic opens to a flickering lighted miniature Christmas tree appearing onscreen and focuses on Morvern spending time on Christmas Eve. She finds her writer boyfriend James Gillespie dead from a suicide and gently strokes him, covers him with a blanket, picks his pocket for 20 quid and parties on until the next morning on CD music and booze as his body rots on the living-room floor. On the computer she finds his suicide note and a list of instructions to use his bank account money to pay for the funeral expenses and an address of a London publisher where she’s to send the novel he dedicated to her. She replaces his name with hers and sends the manuscript off to the publisher. Rather than pay for the funeral, she callously chops up his body in her tub while listening to music with her earphones and later buries him in the moors. She doesn’t tell anyone else about this, instead she mentions to friends her boyfriend just left her for good.

Not knowing quite how to deal with the emotional pain, Morvern walks the darkened barren city streets and reports to the supermarket where she works as a check-out. With the money she has come into, she hops on a plane with her best friend and co-worker Lanna (Kathleen McDermott) and goes for a youth-oriented junket holiday in Spain.

In Spain, Morvern can’t have a good time with the same type of party animals as there are back home. So she strays from her luxury tourist hotel when Lanna shacks up with a guy she just picked-up, who gave her the ecstasy drug. Morvern takes a room in a dumpy apartment-hotel and when she walks past a room where she hears a guy moaning in pain because his mother just died, she ironically becomes more sympathetic to his grief than hers and spends the night in wild sex with him. She returns to Lanna in the morning and without reason drags her along in a cab to some small rural town in the middle of celebrating a loud local festival for a patron saint. This is a back road spot filled with native color, but the tourists avoid it. Still unhappy to be where she’s at, Morvern flees the crowds with Lanna in tow and ends up lost on some isolated road in the middle of nowhere. When Lanna complains, she deserts her and returns to the luxury hotel where she made arrangements to meet the book publishers. The two publishers loved the novel and come to Spain to get her to sign a contract for a £100,000. She then returns home and asks Lanna to go somewhere far away from here with her again, but Lanna refuses. She says all her friends are here. So Morvern wanders off alone to start life anew.

Whatever ultimately the story means, if it does indeed mean more than a youthful character running away from herself, it nevertheless catches an eyeful of youthful alienation and the class-struggle that’s current in Great Britain. It’s hard to figure Morvern out because she doesn’t seem to care about anything or anybody, and the film is so murky about details.

“Morvern rocks.” The director in an interview said some working-class English youths gave that as their opinion of the Samantha Morton character after they attended a special screening. Which might be as good a way as any to explain this sketchy character study of such a seemingly simple and inarticulate person. The problem I had with the pic was I could never get a handle on her or identify with her. She seems aimless, cold and inflicted with self-pain, not the kind of a conflict caused by outside sources but one deeply rooted in psychological problems. Even though the film left a deep and troubling impression on me mainly because of its stylistic and hauntingly bleak and ethereal tone as photographed by cinematographer Alvin Kuchler and by the captivating performance Morton gives, I still couldn’t figure out the film’s blurry point of view. 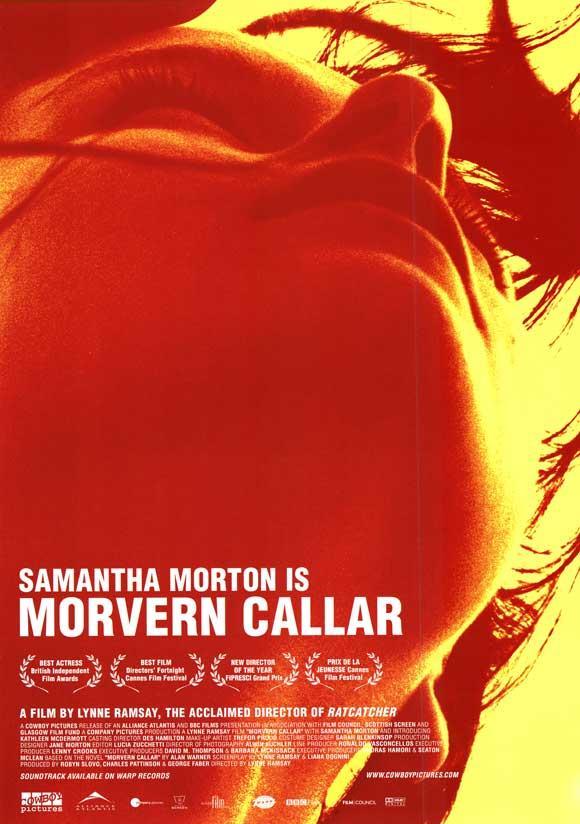