Despite Marlon Brando’s dismissal of the film during its promotional campaign, where he said he only did it for the money, the film stands out as a tense sea adventure. It got good reviews but bombed at the box office, which is the reason its original title was changed from Morituri to The Saboteur: Code Name Morituri. Producer Aaron Rosenberg had trouble securing the right cargo boat and when he secured the battered one he desired from the Chinese, it was mistakenly fixed up and painted. The producer had to go through more expenses making it look battered again. To add to the film’s financial woes, the ship broke down at least three times during the shoot and those delays caused the film to go over budget. Since the entire film was shipboard, it was essential to have the ship operating at all times.

Morituri is set in 1942. It’s about a German pacifist army defector, Robert Crain (Marlon Brando), during the second world war, living in India, who is blackmailed by British Colonel Statler (Trevor Howard) to infiltrate a German blockade runner heading for occupied France and secure the ship for its valuable shipment of 7,000 tons of crude rubber. Craig has little choice but to accept, if he refuses he will be sent back to Germany in exchange for one of their English prisoners. The spy’s new name is Hans Kyle, and he’s also given papers which will allow him to impersonate an SS officer. Kyle’s mission is to board the German merchant marine cargo freighter in Tokyo and use his experience as an ex-engineer corps officer to detonate a series of explosives meant for use by the captain, Mueller (Yul Brynner), if the ship should fall into enemy hands. The British will then intercept the boat at a certain rendezvous point and take the indispensable rubber in an effort to slow down the German war machine for awhile.

The sabotage is complicated when the cynical and dutiful captain proves that he is more interested in doing his job than worrying about politics. Mueller is conflicted over his patriotism and hatred for the Nazis, but out of a sense of duty restricts the movements on the ship for the SS officer. That forces Kyle to take the first officer Kruse (Marlin Beneath), a gung-ho card-carrying member of the Nazi party, into his confidence so he can secretly incapacitate the scuttling charges. There are also a few German prisoners aboard suspicious of the SS officer. One of them is Donkeyman (Hans-Christian Blech), an opinionated political prisoner, who has sabotage plans that conflict with Kyle’s. It all leads to a series of melodramatic events, such as the freighter changing course to escape a British convoy and pursuing destroyer, and later taking on board a group of American prisoners and one German prisoner. That one is the Jewess Esther (Janet Margolin), who lost her family in a concentration camp and was further damaged after being tortured and gang raped by the Gestapo. Kyle’s cover is blown when two officers from the German admiralty unexpectedly come aboard the freighter after a vessel is sunk. It all comes down to whether the Brando character can succeed in rallying the handful of American and German prisoners to overtake the 40-member German crew.

Though dull in spots, this espionage yarn is nevertheless well-acted and the narrative remains hard-hitting. 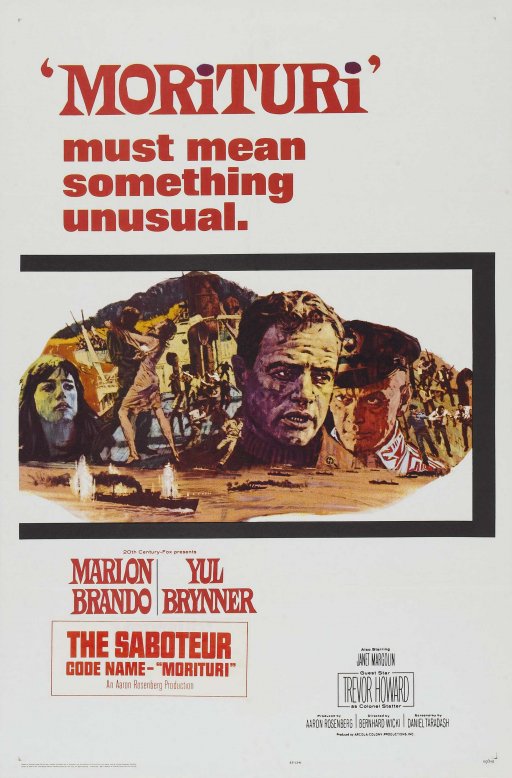