“There’s a lot of entertainment going on in the hour-long low-budget B-film crime drama, from opera to forensic medicine to a whodunit mystery with ethical considerations.”

There’s a lot of entertainment going on in the hour-long low-budget B-film crime drama, from opera to forensic medicine to a whodunit mystery with ethical considerations. It takes place at LA’s famous Hollywood Bowl. Director Edward L. Marin(“Tall in the Saddle”/”Johnny Angel”/”Nocturne”) does a good job keeping it moving at a fast pace. It’s based on a story suggested by Albert J. Cohen and Robert T. Shannon, and is written by Florence Ryerson and Edgar Allan Woolf.

Egotistical womanizing star tenor Gino D’Acosta (Leo Carrillo) is rehearsing at the Hollywood Bowl for a production tomorrow night of Giuseppe Verdi’s Il trovatore, when told in his dressing room by aphony fortune telling swami (Pedro de Cordoba) not to perform tomorrow or he will die. Gino scoffs at the warning, but his latest lover, the ballerina Diana (Benita Hume), is concerned, suspecting her dancing partner Pedro (Duncan Renaldo) might be insanely jealous. Gino is also romancing his female singing star Louisa (Katharine Alexander), whose stern husband is the aware of the relationship conductor Godfrey Chiltern (H. B. Warner). At the rehearsal, Gino is attacked by Bejac (J. Carrol Naish), an insane opera composer who threatens the tenor’s life with a superficial stab wound to the shoulder, using Pedro’s knife, when Gino refuses to listen to his new opera. Bejac is arrested and sent to a mental institution on the recommendation of Dr. Adams (Grant Mitchell), the tenor’s physician and good friend. Chief Quinlan (Robert McWade) and his snappy young partner Steve Farrell (Chester Morris) are assigned the case, with Steve attracted to Adams’ pretty niece, Toni Adams (Madge Evans), who assists uncle as a chemist in his lab work. There’s also a wax doll figure with a pin in it as a curse, sent to Gino urging the singer to not perform tomorrow.

Meanwhile the wacko Bejac overpowers Steve and another detective on his way to incarceration in the mental hospital and mugs an actor at the Bowl, stealing his costume. With cops in attendance, Gino still dies onstage at the end of his performance from a poison.

It’s up to Steve to use his sleuthing skills to catch the mysterious culprit. The story is absurd, but if you don’t try to think too much about the murderer and his reasons and just let it go, it’s an acceptable programmer. Frank McHugh plays Gino’s loyal dresser and does his usual comical bits. Leonard Ceeley plays Gino’s understudy, who is chomping at the bit to take the tenor’s place. But would he commit murder to realize his ambitions? 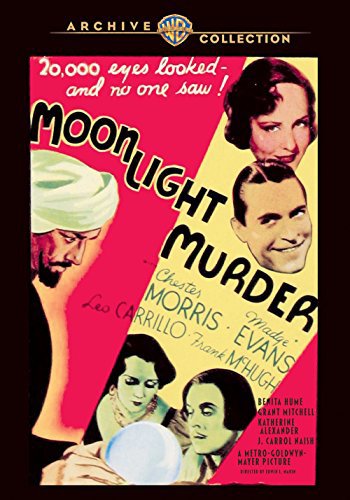