“It’s one of Bergman’s most natural, carnal and accessible films.”

It’s set in Stockholm during the summer. The nice but unsophisticatedhandsome 19-year-old Harry (Lars Ekborg) is unhappy at home with his withdrawn ailing widowed dad (Georg Skarstedt) and is even more unhappy working as a stockboy for a glass factory, where he’s mentally abused by the staff. After he goofs up and has to endure one insult too many, Harry impulsively quits and takes his hospitalized dad’s motorboat to be with the sultry self-centered temptress 18-year-old veggie stand worker Monika (Harriet Andersson) on a leisurely cruise to the islands of the Stockholm archipelago. Monika hates her job where the men pinch her and also hates her home life, where she claims her drunken dad regularly beats her. At first it’s a fun adventure that signals triumph against the adults, but as the summer drags on they grow weary of their rebellious experience and they return home at summer’s end in despair with Monika pregnant. They marry and Harry gets another low paying job and studies to be an engineer to see if he can advance to a better job, while the insensitive and piggish Monika begins to look less like a beauty prize as she becomes a lazy idler, bitches about parenting their little girl, and complains constantly about being without money to buy clothes and living in a dumpy flat. While Harry travels on the job, the bored Monika has numerous affairs. When Harry comes home early from one job, he catches her screwing their mutual acquaintance Lelle (John Harryson), someone he hates. This is too much for the lad and in a downer climax the couple separate with Harry caring for the baby, with help from his aunt (Dagmar Ebbeson).

Harry has no choice but to return to the oppressive workforce, as he grows up fast (the summer is already a distant memory after only a few months) and realizes he has to look forward to only a hard life. While the selfish hedonistic Monika, worried that having a baby made her look less desirable, has taken off to live alone and it’s easy to imagine what kind of life she will lead since she has come-of-age to realize that she can make her way in the world by using her body–her best asset.

What’s really amazing, is that despite Monika’s flawed character she never becomes an unsympathetic figure. This can be attributed to Bergman’s observant direction and Andersson’srealistic earthy performance as someone at odds with the system, who has little chance of winning but who remains defiant. 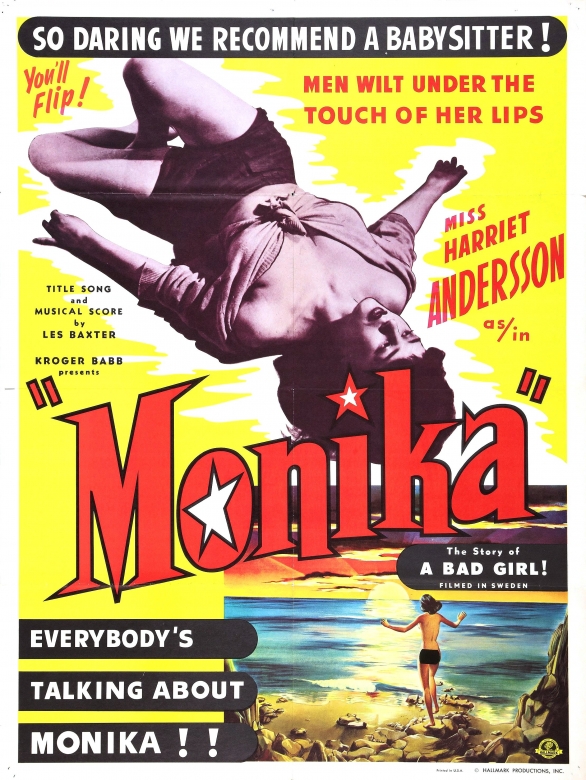