“The best film on bullfighting.“

Neorealist Italian filmmaker Francesco Rosi (“Salvatore Giuliano”/”Lucky Luciano”/”Christ Stopped at Eboli”)travels to Spain to direct the most lyrical, most authentic and the best film on bullfighting that I have seen to date. Even though it’s dubbed in Italian all the scenes capture the local color of Spain’s bullfighting and include a barbaric running of the bulls through the city streets of Pamplona and a colorful but eerie San Fermín Festivalmummer’s state and religious pageantry-filled parade that opens the day before the madcap running of the bulls in this Andalusian region. The film’s moment of truth, the moment the matador kills the bull with his sword, is far less glorified than Hemingway’s kill moment– which he likens to a spiritual conquest. Bullfighting is a sport that thrives on its violent kill and on the grace upon which it is done. The outsider Rosi thoroughly shows both the beautiful arty side and the ugly brutal side to the bloody sport and judges the sport’s violence as mimicking the cruelty of Franco’s fascist society and the long history of Spain’s tyranny. Also observed are the blood-thirsty fans egging the matadors on to be more macho, the celebrities and socialites who inject themselves into the sport scene as hanger-ons wanting to be surrounded by winners and all the parasitic middlemen who make a profit on the labor of the performers from such a barbaric spectacle.

Rosi lets us in on the forces of poverty that drive a handsome young poor farmer from the countryside of Andalusia, Miguel Romero (Miguel Mateo Miguelin, was at the time the third leading matador in the world), who wants more of an opportunity in life than what his hard working father offers as an inheritance, as Miguel returns to the family rural farm in Jaen after participating in the running of the bulls celebration and finishes for dad his futile endless chores of going around in circles in a horse-drawn tiller. Miguel then chooses to go to Barcelona to start his career as an innocent worker in a secure job, but doesn’t land a secure job and, by accident and by taking advantage of an opportunity, achieves fame and fortune by the age of 24 in the dangerous bullrings of Spain.

Miguel, the unskilled laborer, is unhappy that he rooms in a crowded depressing Barcelona boarding house filled with numbered cots for many other men, who are just as desperate as he is that they are stuck with such lousy jobs that offer no greater prospects than those in the country. The strong lad with a good work ethic can only get at best dead-end jobs in the corrupt big city of Barcelona, as he gets work only if he gives a parasite moneylender a big percentage of his small paycheck. The ambitious lad seizes the opportunity to advance when he learns how to be a bullfighter from a former bullfighter, the elderly disgruntled Pedrucho (Pedro Basauri Pedrucho), who teaches him the craft in a ratty basement room. When Miguel impresses at the corrida, he attracts the attention of an agent (Jose Gomez Sevillano), a friend of his teacher, who arranges bull fights for his new client and then works out a deal with an important impresario, Don Ernesto (himself). Under the tutelage of the impresario the farm boy goes on a grueling road tour to perform in rings in Madrid and all across the country and because he pleases the crowds he rises out of his poverty, achieves international fame, feels good that he has given his family money to modernize the farm and is lured into a sexual adventure with an aggressive jaded American bourgeois socialite named Linda (Linda Christian). But Miguel’s sudden success leaves him disillusioned and no longer innocent: his parasitic handlers take big cuts from his wages without sweating for the money like he does, his material gains do not give him peace of mind but leave him feeling cynical, empty and fearful of the dangerous profession he has chosen and, though rich, Miguel is unable to stop craving for more wealth, as he can’t stop doing what he no longer feels like doing (becoming somewhat like his father). Unable to get off going around this circle of greed, Miguel is finally gored to death in the ring–with his last words to his agent being to tell his mother that the injury is nothing.

The cruel world of the bull ring is mirrored by the cruel real world, in this unsentimental film that relentlessly depicts the exploitation of the working-class, the senseless killing of an animal in the ring to prove a bullfighter’s manhood and how the game of life is unfairly played by the ruling class’s rules.

It’s aesthetically a visually beautiful film–one that takes a hard look at the violent sport as well as the realities of being a manual laborer that are apt to cause a person to become rundown during his lifetime, but whose labor is without the same material benefits. Rosi also offers a powerful fictional melodrama about the rise and fall of a torero, told as if an operatic tale. The torero is superbly played in a convincing realistic manner by the legendary torero Miguelin, who expresses the emotional ups and down of being an heroic role model for such a fickle enterprise. The film turns the usual sport film cliches on its head to give us a uniquely subversive look at the sport and tell us more about society and human nature than we can perhaps dare to imagine. It shows that even if the hero overcomes his poverty and becomes more worldly, he still suffers tragic consequences because he never knew what he wanted and couldn’t look inside himself to find out.

The Marxist philosopher Rosi and co writers Pedro Portabella, Ricardo Munoz Suay and Pedro Beltran leave you feeling both religion and sport are used by the government to help the masses forget their misery so they can be sidetracked to lose themselves in distractions like from religion’s pageantry and from vicariously living through others in sports. Religion and sport both act as an opium to dull the senses of the masses so they can’t see what really ails them and the world. But Miguel at least learns through his rags to riches journey that society thinks he’s no different than the bull: that both are just pieces of dead meat waiting to be carted off when they are no longer useful to society. 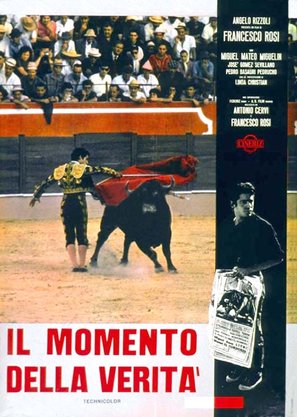