“An influential but forgettable and slow-moving sci-fi thriller with an agreeable espionage twist over a controversial secret mind-control experiment.”

An influential but forgettable and slow-moving sci-fi thriller with an agreeable espionage twist over a controversial secret mind-control experiment. Director Basil Dearden (“Khartoum”/”Woman of Straw”/”Victim”) keeps the main story from imploding by maintaining a serious tone throughout. James Kennaway’s screenplay, based on his novel, is mostly flat, but does rise on occasions to provide some excitement.

Prof. Sharpey (Harold Goldblatt) is an elderly liberal anti-nuke research scientist from Oxford University who works for the British government conducting secret lab experiments in sensory deprivation and isolation. When he commits suicide by jumping out of a moving train and by his side is discovered a briefcase filled with notes worth £1,000, the steely thick-skinned Major Hall (John Clements),a scientist who is also a M15 investigator, believes either Sharpey sold-out to the commies or was brainwashed. To see if Sharpey was a traitor and there’s a security problem in the project, Holt convinces Sharpey’s colleague Dr. Henry Longman (Dirk Bogarde), who does not believe Sharpey was a traitor but was a changed man because of the experiments, to do the same experiment as Sharpey in an isolation tank submerged under water for an extended period of time and see how the reduction of sensations affects him. Holt gets Longman’s young research associate Dr. Tony Tate (Michael Bryant)to poison Longman’s mind with misinformation of his beloved pregnant wife Oonagh (Mary Ure) being unfaithful. We then observe how the scientist comes out of the isolation tank a different person, one who is brainwashed and no longer cares for his wife and four children.

Dearden builds as much suspense as he can from such a tale about indoctrination, that turns intoa Jekyll and Hyde character study and into a family drama of an ideal marriage that hits rock bottom but one in which Hall feels a major responsibility to rekindle. Though never totally believable as a sci-fi, espionage or a love story, it remains gripping and provocative by keeping things intelligently grounded and that the talented cast play their parts so well. 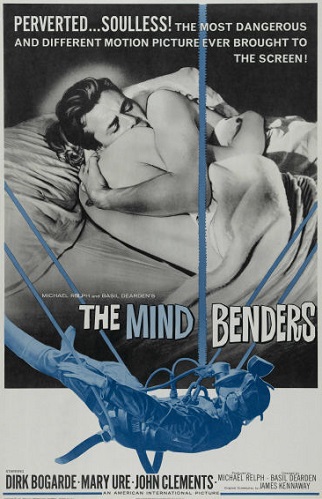