M. Butterfly is based on David Hwang’s three-time Tony Award-winning Broadway play, which was built around Puccini’s “Madame Butterfly.” It’s an offshoot of “The Crying Game,” but with more ambitious plans, less of a humorous offering and is far more biting. Horrormeister filmmaker David Cronenberg (“Crash”/”Naked Lunch”/”Spider”) carefully scrutinizes an affair between a French diplomat and a she-male Chinese opera singer that’s filled with cultural observations about the east and the west, the idealizing of sexual roles, the extremities of desire, the thrill of charades, the implications of Madame Butterfly to both the westerner and Oriental, and the duplicity of governments. This fictionalized telling is inspired by a true incident that caused a global fuss involving a French diplomat on trial for espionage. He carried on an affair for 20 years with a man the diplomat thought was a woman, but in actuality was a Chinese female impersonator in a Beijing Opera house who was a spy. It has a lot on its plate that doesn’t always go down as well as it could, but there’s a lot to chew on in this incredible love story turned into a grisly horror story.

René Gallimard (Jeremy Irons) is a lowly accountant in the French embassy in Beijing in 1964, at a time when the French lost their position in the world as a major player after they got the boot in Indo-China. The Americans were engaged in the Viet Nam war and it was at the pre-Cultural Revolution time in China just before the Chinese revolution had Mao’s nationalistic peasant-minded intellectual hating Red Guards in charge of the country. Though married to an ordinary French woman (Barbara Sukowa), the smug imperialist but more liberal-minded than his colleagues Gallimard attends the Madame Butterfly opera at the Swedish Embassy performed by the Beijing Opera company and falls madly in love with the diva–Song Liling (John Lone). He begins a relationship with Song believing her to be a compliant female willing to submit herself to him as his love slave, but never sees the demure woman in the nude as she plays to his fantasies about what the ideal Oriental woman is like as seen through white eyes. It turns out she’s blackmailed into spying by the Red Guards to make up for her past mistakes and gets the urbane Gallimard to think he’s met the perfect woman so she can pump him for information about American troop movements in Viet Nam. Gallimard’s, boss, the ambassador (Ian Richardson), promotes him to vice consul during these changing times and asks him to spy on the Chinese to get information about their intentions in Viet Nam as a favor to the Americans who don’t have an embassy in China. In 1968 he’s fired when the information he provides them proves to be useless and the ambassador is alarmed that he might be losing his mind. His wife has left him, and he returns to Paris alone as a defeated man leaving a country he adores but doesn’t really understand. Gallimard is further depressed because he was falsely led to believe his Chinese butterfly presented him with a son and that his baby has been taken by the Red Guard along with his mother and sent to a labor camp for a re-education program for artists. Later Song surprisingly appears in Paris and the two resume their affair, with the spy talking her White Devil lover into getting a job as a diplomatic courier and stealing important government documents so that they can get their child back. He’s caught and goes to trial where he learns for the first time his lover’s true gender and becomes the laughing stock of the country, as Song completely sells him out as the surprise witness at the trial before going back to China.

Irons gives a risky performance showing he understands the monstrosity of Cronenberg’s purpose to show that the freedom to love provides also the possible entrapment when one loses their head completely and can’t help being made the fool. This kind of mad cleansing love becomes much like Cronenberg’s denouements in his horror films, where the person is betrayed by the forces of nature that turn their life into the bizarre. By Irons playing this role with such firm conviction, he got this viewer to believe in his outrageous fantasy and his gullibility. It’s an idiosyncratic film that is meant to disturb, and in that it succeeds though some may find it difficult to see what Cronenberg is driving at when he pictures dragonflies in cages and butterflies that sting and a lover who is so easily blinded by his desires. 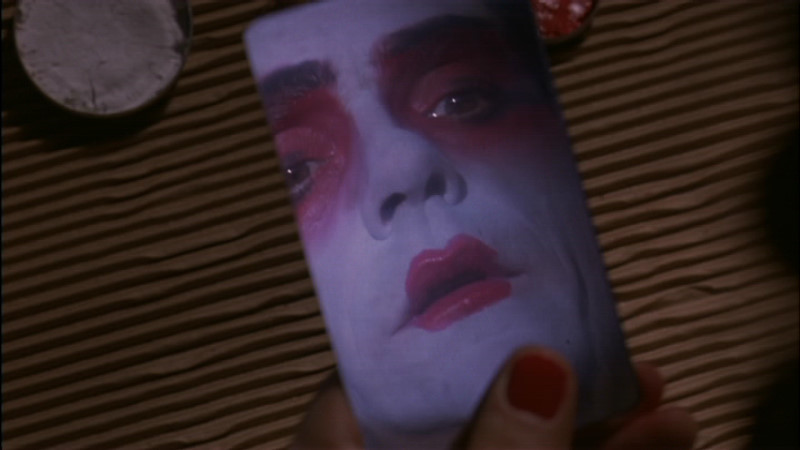