“It never captured my fancy or had much depth.”

Former animator Wes Ball in his directing debut adapts to film the best-selling 2009 novel by James Dashner, as an enigmatic children’s futuristic adventure thriller. It tries to channel The Hunger Games vibe and give it a Lord of the Flies survival feel, but it never captured my fancy or had much depth. I was put off with it early on and never got into it, and I was further put off by its clunky dialogue, its incredulous premise and the more I learned about its mystery story the more I lost interest.

It opens with an intense youth suffering from amnesia, who later remembers that his name is Thomas (Dylan O’Brien), waking up with a blank mind in a wire cage lift that moves slowly upward. The startled lad is surrounded by a group of teenage boys who yell out that he’s a Greenie (newcomer) and bid him welcome to the Glade. The Glade is a large tract of forest clearing that’s surrounded by gigantic concrete walls that open during the day but close at night, and lead to the mysterious Maze. One learns from the youths that no one can survive in the Maze, as it’s guarded by monsters called “Grievers” that look similar to spiders and scorpions–only are much bigger.

The viewer is weighed down with frequent fragmented explanations by the Glade characters, all suffering from amnesia, on a mission to tell us all the essential things to know about their weird situation, such asknowing in the Glade every 30 days a new boy arrives by elevator and that strict rules were made by the early arrivals, the Glade’s hierarchy, for how to survive by playing a role. For instance, to be a Runner, the elite position, you must be selected by the leaders and only function during the day to map out the Maze by running around it from the outside.

One week after Thomas’s arrival, is the arrival of Teresa (Kaya Scodelario)–the first girl. Questions arise of how she knew Thomas, but before long she settles into the plot as the token girl in the flick and adds nothing to the film.

Other boys of interest include the conflicted enforcer of the rules Will Poulter, whose character ys Gally; the archetypal characters Thomas Brodie-Sangster (one of the respected leaders), Blake Cooper (the group’s chubby pet), Aml Ameen (the first arrival and natural leader) and Ki Hong Lee (in charge of the Runners and of investigating the mysteries of the Maze). Patricia Clarkson appears briefly as the leader of the sinister W.C.K.D organization, who are the authoritarian figures responsible for the way the world is. The great actress Clarkson contributes nothing to the film, in a meaningless cameo.

The ongoing plot has us aware that there’s something in our messianic hero Thomas’ mind that if revealed will help him escape his fate and solve what all this Maze nonsense is all about. So much of the pic has halts in the dramatics to explain the hokum vocabulary and situations, that irritation was my most prevailing mood throughout. While the dystopian sci-fi futuristic setting only got me to thinking how Hollywood will manage to navigate a course that is already not original in film and how its targeted youth audience will respond to the film version of a book it took readily to. It’s also irritating how it poorly concludes on an inconclusive note, mostly trying to sell you on seeing its sequel instead of giving you a fully developed conclusion it suckered you into thinking you would get. Please note this was only the first of Dasher’s four volume set. 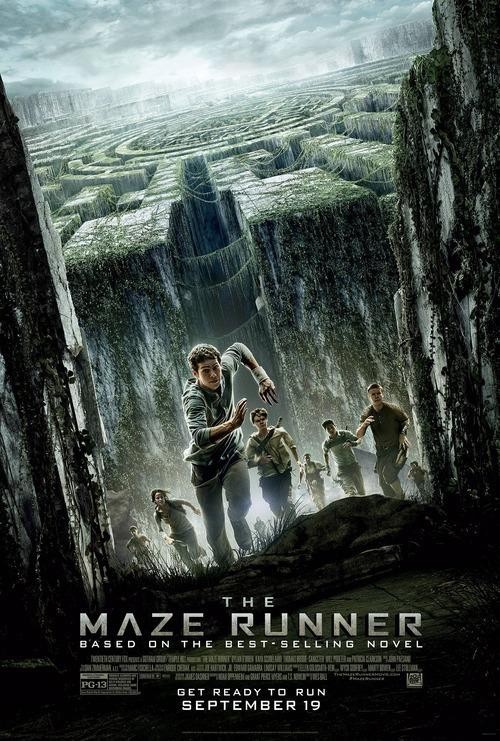