Matchstick Men is directed with confidence by Ridley Scott, who has recently brought to screen much more epic stories in the likes of Gladiator and Black Hawk Down. Matchstick is adapted to the screen by Nicholas and Ted Griffin from Eric Garcia’s thriller novel. The actors make this con artist film seem like easy pickings, even as the flimflam schemes eventually peter out and all we’re left to ponder are the artful performances. I was left wondering just how these smooth operators slickly put the con on the viewer with so much familiar grifter genre formula stuff, that I must take my hat off to them for getting over; that is, if I still have a hat after leaving the theater. Afterwards, like any player in a shellgame, I realized that there was not much here besides the performances. I was also impressed by the sleek backdrop settings and the beautifully framed shots of Nic Cage’s sterile mod pad, and how clever the filmmaker was in distracting me from keeping an eye on the real game going on. But Scott got caught in all his cleverness, and messed up the film’s almost perfect stagings by staying around too long after the Big Scam in order to stay with the undeserving main character.

Nicolas Cage is Roy, a veteran grifter who has a bundle stashed away in a safety deposit box proving how crime pays handsomely (now in a mainstream film such as this one, you can readily guess that such an amoral character in the end either gets his come-uppance or must drastically change his lifestyle and see the light). Roy’s a loner, divorced fourteen years ago, living in a mod richly carpeted pad with an unused swimming pool but no TV in southern California and is plagued by a number of neuroses including facial tics, an obsessive-compulsive disorder, agoraphobia, anxiety attacks, a compulsion for cleanliness, and many other disorders. His young ambitious protégé is a slovenly, wisecracking, con-man sidekick named Frank (Sam Rockwell). They are seen together working a telemarketing scam where they randomly call their vics, selling overpriced home “water filtration systems” by pretending to give away nonexistent luxury prizes. They not only get the poor vic once, but work a scheme where they pose as federal agents investigating tax fraud to heartlessly dupe them again.

When Roy accidentally washes his pills down the drain and his illegal supplier can’t be found, he seeks pills from a smooth therapist named Dr. Klein (Altman) as he can’t function without his medication. During their therapy session Roy mentions his former wife and gets Dr. Klein to call since he is too frightened to speak to her. It results in his 14-year-old daughter Angela (Alison Lohman, who is actually 23), someone he didn’t know existed, coming to stay with him for a weekend and then staying for the summer break. Their bouncy relationship is magical, as Roy doesn’t know how to be a father and she only knows how to push all his buttons. But they somehow bond, and Roy starts having conscience pangs and thinks he might be ready to change his criminal ways and stop being a basket case.

But as a favor to Frank, Roy decides to go for one big last money laundering job on a mark named Chuck (McGill) that Frank has setup for the kill. They are going to pull the “Jamaican switch,” but somehow things get changed at the last second and Angela gets involved in the scheme.

Things were going along fine at this point, but after the final scam is played out as its trump card the film reshuffles its hand and messes up the fixed game it so artfully setup by going into a preachy moralistic tidy ending. That was enough to expose Ridley Scott for not having the heart to go all the way and play out this con game for real, as it was entitled to go down. Scott mistakenly thinks we should really care about a dirtbag like the Nic Cage character. In the end he turns this shellgame into a human interest story and leaves the impression that the ruthless con artist only exploited vics who were greedy and therefore they deserved to be taken, and that really he’s not such a bad guy but only very good at his craft. Scott should have saved such sentimentality for another film, it just didn’t fit here. Why in the world should I care about a guy who heartlessly ripped off all kinds of victims! That’s a good enough reason not to buy into this breezy human interest story about such sorry characters. 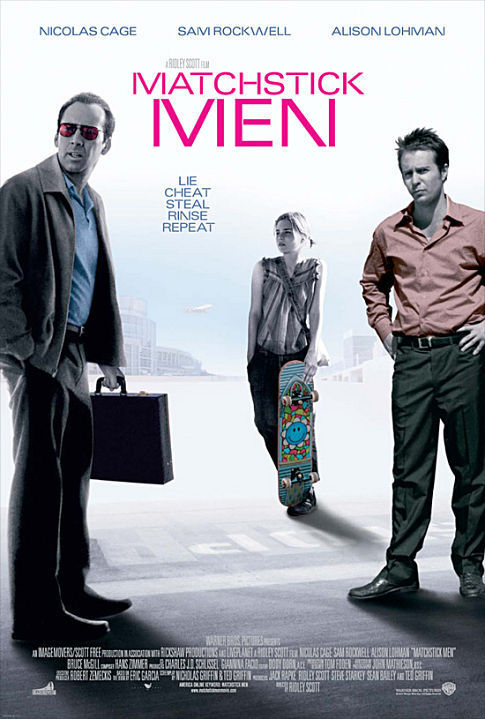