“Biberman’s film annoys by patting itself on the back for stating the obvious about the Nazi monsters.”

A speechifying WW11 allied propaganda curiosity film made just before D-Day June 6, 1944. It’s directed and co-written by Herbert Biberman and based on his story. It offers a premature warning that the Nazis will lose the war, but their cause is not dead if the free world is not vigilant in their peacetime efforts to stop the unrepentant Nazis from keeping the idea of the Master Race alive. Its theme is wrapped around a war-torn town learning to trust each other again.

A Nazi Colonel Von Beck (George Coulouris), dedicated to the cause of the Master Race, arrives in the small bombed-out Belgian village of Kolar on the eve of its liberation by the Allied troops and the rout of the German army. He has the identity papers of captured and slain guerrilla fighter Ferdinand Varin, the brother of a prominent local family who were collaborators. It is Von Beck’s plan to pose as Ferdinand by going to Varin’s family home and forcing the remaining family members to not give him away or else he will rat them out to the guerrillas returning from the hills. Ferdinand’s brother is dead but his wife Martha (Helen Beverly) is alive, as is their pretty young and innocent daughter Nina (Nancy Gates). They are afraid that their neighbors hate them and will take revenge on them. Nina’s boyfriend Frank Bartoc (Lloyd Bridges) and his father (Morris Carnovsky) return from the hills after three years away, and when Frank’s sister Helena (Osa Massen) informs him that the Varins are traitors he rejects Nina. It’s also learned that Helena was raped by a German soldier and gave birth to girl, and is being ostracized by the community. In the meantime Ferdinand tries to derail any effort of a return to normalcy and sows dissension among the Belgians: railing against all foreigners, the Germans for their former occupation, the Soviet doctor (Carl Esmond) freed by the allies and now treating the casualties, and the presence of the American occupiers led by Maj. Philip Carson (Stanley Ridges) and the Brits led by Captain Forsythe. The rift amongst the villagers is intensified when embittered town council member Josef Katry (Paul Guilfoyle) is influenced by Ferdinand to take over the Varin’s old mill for his capitalist venture and not help the town with its attempt at agriculture to get everyone back on their feet again. It leads to Ferdinand supplying Josef with dynamite to blow up the prison where the hated Germans are being detained, as the cunning Nazi wants to make sure that none of the Nazis are around to identify him.

Strangely curious but emotionally overwrought and too melodramatic. Biberman’s film annoys by patting itself on the back for stating the obvious about the Nazi monsters. 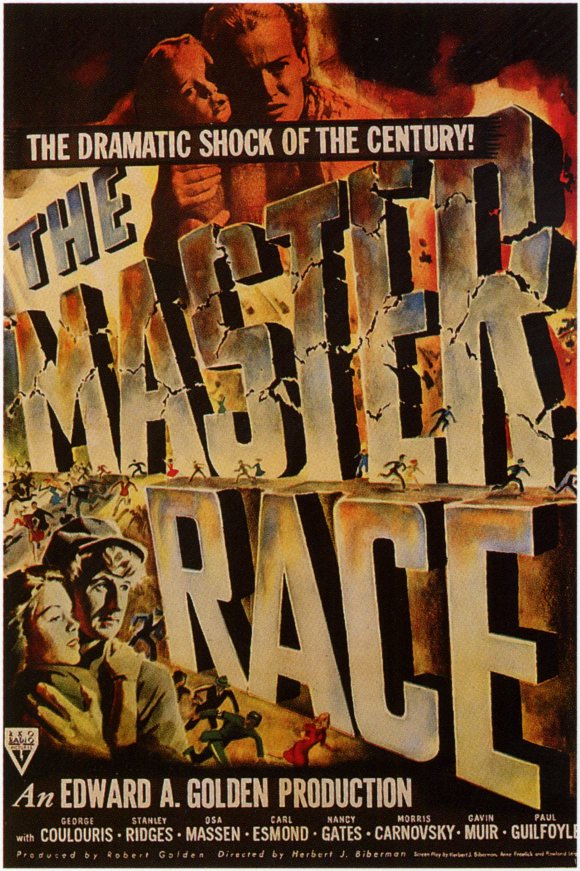