MAN ON A STRING

The filmmaker with an eyepatch, Andre De Toth (“Passport to Suez”/”The Stranger Wore a Gun/”Dark Waters”), shoots this flat, dated and unbelievable anti-communist propaganda film in a semi-documentary style with Clete Roberts as narrator (he was a war correspondent who later became a reporter on Los Angeles television). It’s based on the real-life story of Boris Morros, taken from his book Ten Years a Counterspy by Boris Morros with Charles Samuels. The screenwriters who turned in this benign script are John Kafka and Virginia Shaler.

The “Central Bureau of Intelligence,” a CIA-like spy agency, goes after communist spies during the height of the cold war. American agents Jenkins and Sanford enlist successful Russian-born American musician and Hollywood producer Boris Mitrov (Ernest Borgnine) to be a double-agent after its surveillance operation indicates he was secretly conspiring with the Soviet Union in order to bring his father and brothers to America.

Boris’ Russian contact, Col. Vladimir “Vadja” Kubelov, the top KGB officer in Washington, arranges for American multi-millionaire banker and his wife, Adrian and Helen Benson, both of whom are Communists, to take over Boris’ studio. When Boris’ father arrives to live in his son’s luxurious Beverly Hills home, he tells his son that his brothers are all dead. After Boris agrees to help the Bureau, when he’s told by the American agents they have the goods on him, they send him to Berlin, supposedly to make propaganda documentary films for the U.S. government. He’s to be accompanied by his former assistant, Robert Avery (Kerwin Mathews), in reality a special agent assigned to watch over him.

When Boris convinces the KGB he can be trusted, he goes to Moscow. Here he chooses to spy for the Americans and greatly helps them idenify Soviet spies, so they in turn drop their former charges against him of abetting the enemy and even heap patriotic honors on him.

The clichéd dialogue, robotic acting and simplistic nature of the betrayal story made this not a very entertaining biopic. It only held my attention with its realistic black and white location shots of Berlin and Moscow, and as a curious look back at the days of the American paranoia over communism. 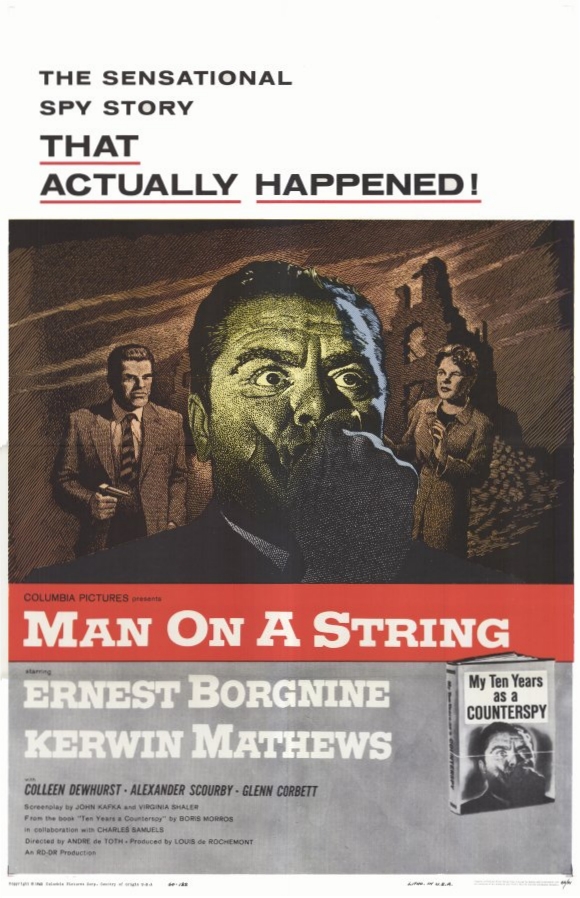