MAN IN THE VAULT

This low-budget crime thriller is produced by John Wayne’s Batjac company and directed by the inexperienced Andrew V. McLaglen (“Something Big”/”Fools’ Parade”/”Hellfighters”), the son of Victor McLaglen–one of the Duke’s favorite costars. Too bad the kid doesn’t have much ability as a director, as there were things that could have been done much better to make this more of a classic film noir than just a forgettable programmer. It’s adapted by old Wayne crony Burt Kennedy from the hard-boiled novel The Lock and the Key by Frank Gruber. The predictable caper film is only mildly entertaining; its most memorable scene has a lifeless locksmith, William Campbell (a cult actor best known for his long association with Star Trek), inside a bank vault trying to make keys on the fly for a safety deposit box that is not his and contains $200,000.

Career low-level hood Willis Trent (Berry Kroger) lures young locksmith Tommy Dancer (William Campbell) into his scheme to make a key to rob crime boss Paul De Camp (James Seay) of the $200,000 he keeps there. Trent’s handsome gigolo lawyer friend, Earl Farraday (Robert Keys), romanced De Camp’s unreliable buxom gun moll, Flo (Anita Ekberg), in order to get the number of the safety deposit box. Tommy falls for 23-year-old spoiled rich girl Betty Turner (Karen Sharpe), whom he meets at party thrown by Trent. She lives in Beverly Hills with her wealthy folks, who give her everything she wants which includes a Cadillac convertible and a mink stole. Betty’s in love with Earl but raging that he’s with Flo, so Tommy steps in to fill the gap as they go on a brainless romantic adventure–he takes her to an empty Hollywood Bowl and seems stumped when she asks him if he likes classical music.

The kid first turns down Trent and the $5,000 he offers, then when Trent’s ex-boxer goon Louie threatens to hurt Betty he agrees. But when he executes the robbery, he feels insecure because of his low paying job ($75 a week before taxes), thinking he’s not good enough for Betty, and decides to run away with the stolen money. When he learns that Trent has nabbed Betty, he tries to return the money to him but complications develop when De Camp has learned through Flo that Trent was behind the robbery.

It’s a dark and hysterical story, shot almost entirely at night and in a bowling alley (Art Linkletter’s popular La Cienega Bowling Lanes)–making good use of real Los Angeles locales such as at the bank at Hollywood Boulevard and Highland Avenue. It ends on an unconvincing happy note, as if the writer had a gun to his head and was forced to come up with a positive ending or die. 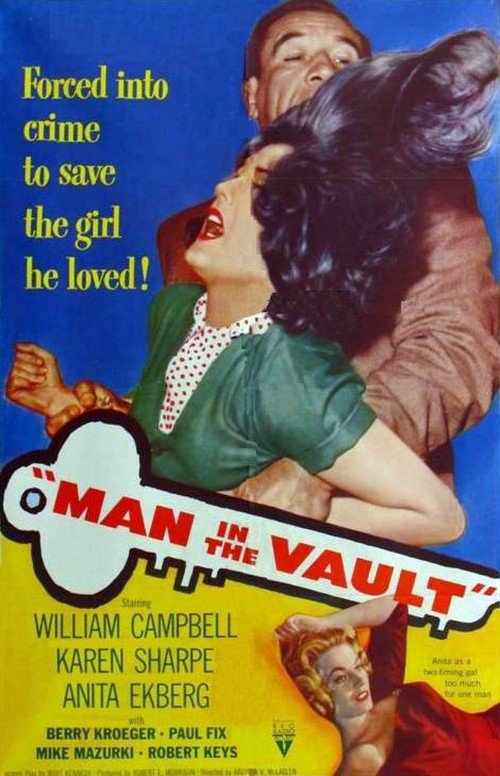