MAN FROM LONDON, THE (aka: A LONDON FERFI)

Acclaimed Hungarian filmmaker Bela Tarr (“Werckmeister Harmonies”/”Satantango”/”Damnation”) took four years to bring to the screen the minor 1934 pulp-mystery novel L’homme de Londres by the Belgian writer Georges Simenon, as there were breaks in the filming. It’s co-written by novelist Laszlo Krasznahorkaiand Tarr, while German cinematographer Fred Kelemen(a former student of Tarr’s) uses long tracking shots and shoots from a camera below eye level. The sparse dialogue, almost no talking for the first ten minutes, makes the b/w pic almost seem like a silent film in its long pauses and deliberate pace.

The gloomy tale, that dehumanizes the lead characters to the point we could care less about them, attempts to explore man’s greed, desires and sense of justice by inducing a meditation on images. This type of filming makes for a unique metaphysical arty film noir. It focuses on an uptight and brusque middle-age man, who for the first-time in his life must confront his hopeless sense of being after witnessing a murder and becomes rattled when he goes against his conventional life to make a daring but morally wrong decision.The simplistic robbery and murder plotline is easily forgettable, even if Tarr’s unusual take on such a dark tale is not. This is at least the third stab at putting the unimpressive Simenon short story on film, and Tarr’s version is vastly different (not necessarily better) than the other versions.

Maloin (Miroslav Krobot) is a withdrawn, laconic, middle-aged railway switchman working the nightshift from a box type of workplace located above the railroad tracks along a foggy fictional French port – Bastia in Corsica, by the English Channel. He witnesses from his work station, where he remains in isolation, almost as if he were in prison, an Englishman thief, Mr. Brown (Janos Derzsi), dispatch overboard into the sea his Englishman accomplice, Teddy, after a scuffle on the ship, and then watches him toss a suitcase onto the dock. The switchman retrieves the cash-filled suitcase left behind, the object of the robbery, and instead of reporting the incident to the police, he sees this as a chance to make a better life for himself. Maloin is a sad-eyed depressive who is imprisoned by a dull routine life and locked into a loveless marriage of 25 years to his wife Camelia (Tilda Swinton). He hopes his gentle daughter Henriette (Erika Bok), who he brow-beats, could at least have better prospects than being a cleaning woman – a job he forces her to quit when he finds the money.

When the wily police inspector from London, Inspector Morrison (István Lénárt), arrives the next day and in his investigation explains to all parties concerned that the Saturday night robbery victim, theater owner Mitchell, expresses a willingness to settle things on the quiet and will not press charges if the money, some £ 60 thousand, is returned. There will also be a reward tossed in when the money is returned intact. The guilt-ridden Maloin, not a criminal type, begins to freak out and act strangely insulting to his family. Maloin also arouses the suspicion of the family man Brown, leading a secretive life as a criminal, who trails him after escaping from the policeman. When the inspector questions Maloin in his work station, he makes the switchman nervous.

It ends with the anti-hero Maloin forced to accept himself as a failure, who can only return to his imprisoned civilian life realizing that he doesn’t have it in him to escape the destiny he created for himself and returns the money after he kills Mr. Brown. After surrendering to the inspector, he’s surprised that he’s cleared of the manslaughter charge – ruled by the detective a case of self-defense. Both Maloin and the devastated Mrs. Brown (Agi Szirtes) are given a small reward by the inspector, as if too soothe their feelings for their loss of their loved one or the stolen loot. The enigmatic tragic amoral ending is as far from a fairy-tale (Hollywood) happy ending as possibly could be.

It boils over as a piece on moral ambiguity (with an unclear ending that remains too open-ended for its own good), that’s intriguingly mysterious but not completely successful because Tarr seems out of his usual elements in this existentialist noir setting even if he tosses in some of his familiar concerns over the abuses of authority, entropy, the weariness of ordinary life and man’s restless nature causing his loss of innocence. There’s also the matter of Tilda being dubbed into Hungarian and the many other dub jobs for the international cast from Hungarian into French with English subtitles, giving the pic a weird feel to it as to language and place.

Mihaly Vig’s haunting score helps establish the pic’s nightmarish mood, as the atmospheric pic tries to get by on atmosphere alone to sell this miserable tale about its character’s being unable to change their destiny even when opportunity knocks. Though it’s visually hypnotic and its unusual style can be alluring, it nevertheless falters because the plotline is not much and the characters are too undeveloped to make the film shine in all the darkness. 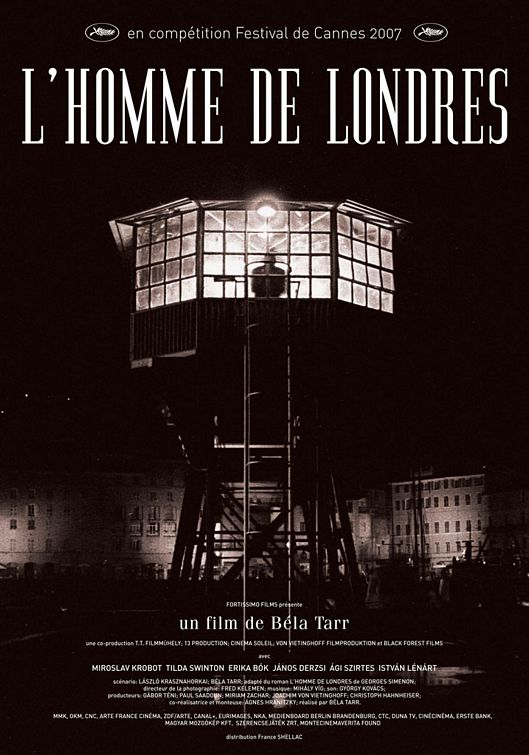