MAN FROM ELYSIAN FIELDS, THE

Struggling Pasadena, California, novelist Byron Tiller (Garcia) finds that his novel Hitler’s Child, about Hitler and Eva raising a child, which took him 7 years to write and made him give up a career in advertising, is not selling even though it received a laudatory review from the N.Y. Times. Also his latest novel was turned down by that same publisher because his premise about King Arthur’s Excalibur sword used as a rosy metaphor for migrant workers didn’t make sense. His loving wife Dena (Margulies) encourages him to continue writing while the happily married man dotes over his young son, already talking to him about becoming a lawyer to avoid his problems as the breadwinner. George Hickenlooper (“The Big Brass Ring“) limply directs this satirical comedy/drama/moral fable; Phillip Jayson Lasker turns in the uneven script, that relies on cliché literary sayings to pave the way for finding one’s self at the end of the road. It’s based on the premise of a writer being a whore to get published.

The film’s title pays respect to Virgil’s “Aeneid,” but in its pretense to be high-minded it weakens its many literary remarks that range from Mark Twain to Shakespeare as it mixes banality with literature and comes up with a pap concoction.

The story revolves around the writer feeling the economic pressure to keep up with his middle-class family expenses and at a low point in his life he is lured by the suave Satanic figure of Luther Fox (Jagger) into becoming a whore. Luther is someone he meets in a bar that is nearby where both his agent and Luther have offices. Byron connects with the smooth talking Brit after he flatters his ego by saying he read his book and liked it. Byron grudgingly takes the Faustian offer to rent out his body to get big money by working for the high-class male escort service, where he is to service bored and lonely rich ladies with companionship and sex. The film winds its way through the moral problems of being a whore and leaves the moralistic message: if you are a whore, that’s how you deserve to be treated.

Byron’s first customer is not Shelley but an icy beauty named Andrea Allcott (Williams), a young aesthete who is married to an elderly Nobel Prize-winning author Tobias (Coburn) who has become impotent and encourages his wife to be pleasured so that she can be happy. The wealthy libertine Tobias happens to be an author Byron admires greatly since his college days. The running gag becomes in the number of times Tobias enters his wife’s separate bedroom and glowingly approves of her affair. But when Byron pans his latest book, he gets slugged. The once stay-at-home dad starts to spend all his nights at the Allcott’s villa, which at first doesn’t arouse his wife’s suspicions; but, when it does the writer’s double life causes wifey to dump him. Tobias has written a book about the Roman Empire and when it sinks in that Byron’s honest evaluation that it’s crap might be right, he works out a handshake deal so that they’ll be collaborators as co-authors and Byron will get thirty percent of the royalties.

The well-mannered and sophisticated gigolo is a study in self-pity and desperation. While the swagger is taken out of the amoral Jagger character, when his favorite customer and the only one he still services out of love, Jennifer Adler (Huston), rejects his offer of marriage as laughable. But the film never found a right balance in its mix of literature and sentimental soap opera. It relies solely on its one-liners to give it grace and weight, which makes for many an awkward scene. Though some of the lines are witty. Jagger says “If you don’t use success to enrich your life, you are just putting failure into Gucci shoes.” Another hustler (Michael Des Barres) explains why he works in the Elysian Fields firm: “Fucking is the last resort for a man who feels impotent.”

Everything went down in an uneasy manner. The acting seemed stiff. The story was hardly convincing. The dark cinematographic look gave it a noir quality, but none of the characters gained my sympathy as truly noir tragic figures. Instead I felt this was bad literature transferred into a ridiculous film that could never take its promising premise beyond the conventional. In the end the naive antihero, who is supposed to have found his voice as a great writer through his semi-autobiography when he loses everything, has learned only two important lessons: 1. Never become a whore if you want to stay happily married. 2. Never make a book deal unless you have a written contract. This viewer learned: Be wary of a film that falls shamelessly in love with its shaky premise and can only exude charm. 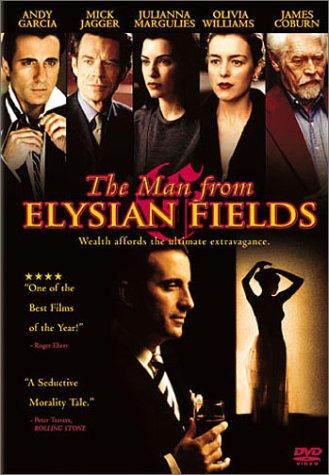