MAN WHO SOLD HIS SKIN, THE (L’HOMME QUI A VENDU SA PEAU)

“A playful and quirky satire on how the cynical world treats asylum seekers.”

Tunisian female filmmaker Kaouther Ben Hania (“Beauty and the Dogs”/”Zaineb Hates The Snow”), an African Arab Muslim, gives us a playful and quirky satire on how the cynical world treats asylum seekers (testing the case for individual rights versus ones for society). It features a heavily tattooed man, the Syrian refugee Sam Ali (Yahya Mahayni), who seeks to reunite with his lost love by his controversial decision to become a tattooed living canvas and thereby is granted favor to freely travel as a commodity. It seems to be a fact that those displaced by politics or war, or economic disaster, or climate change stand less of a chance to get around in the world than art.

The film turns the true story into a curious musing on freedom. It’s inspired by the true story of the former tattoo artist, the Swiss-born Londoner Tim Steiner, who sold his back as an art canvas for Belgian artist Wim Delvoye during the period between 2006 and 2008. A few times a year, Steiner would get paid to exhibit himself in international galleries as a living exhibition, as the public viewed Delvoye’s colorful tattoos with a visa stamped on his back.

Hania slyly moves the theme into political territory by considering what would happen if the Syrian refugee commercialized his body in this way—wishing only to travel to see his former girlfriend Abeer (Dea Liane), who after an arranged marriage with an Arabic diplomat (Saad Lostan) from Belgium, works in Brussels as an Arabic translator in the Syrian embassy.

The movie changes locations from from Raqqa to Beirut to Brussels.

Sam Ali has been forced to flee Syria after a loud outburst on a train, that was triggered by his wish that was denied to travel to Belgium to see Abeer but was prohibited to without a visa.

When Sam makes his way into Lebanon, he becomes a frequent art gallery visitor just for the free food served the rich patrons. While there he befriends Belgian artist Jeffrey Godefroi (Koen de Bouw), and works his deal with him to become an art commodity and thereby visit Belgium when he couldn’t do so as a person. The film’s theme being “commodities” are easier  to travel the globe than human beings.

The bold film is sustained by excellent craftsmanship, and the most enjoyable and lively performance by Mahayni. His acting combination of vulnerability and impulsiveness gives the film its winsome charm. Its clever story caught my interest in the way it told its immigrant tale and the comedy was quite good. It’s a film with a long-shot chance of snatching an Oscar for Foreign Film.

It was also a coup for the filmmaker in getting the Italian sex goddess, Monica Bellucci, to play the art gallery owner in Lebanon, who was on to the immigrant coming to the gallery just for the free food. 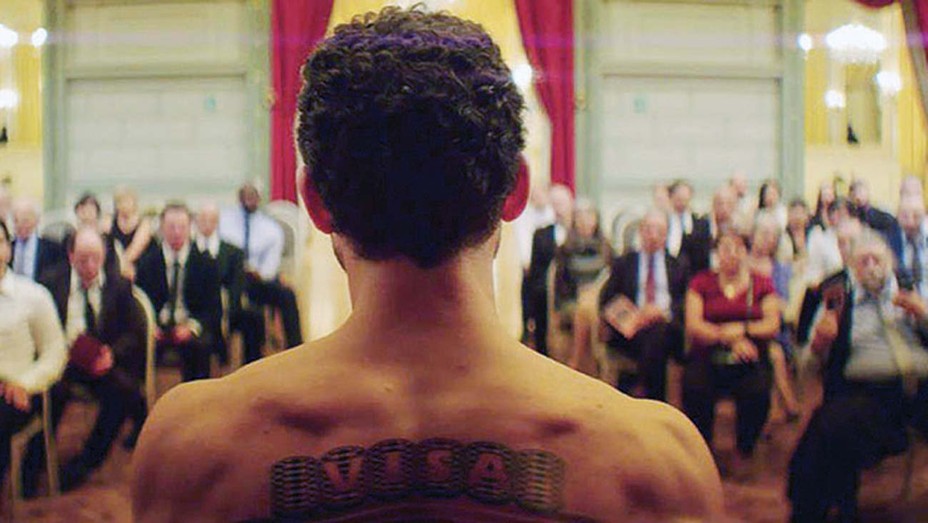 NOTHING BUT THE NIGHT