A film noir about a family threatened by an abusive husband. Crystal Benson (Dorothy McGuire) has been on the run for the last 18 years from her husband Steve Blackford (Stephen McNally), and is frightened at what he will now do to her and her daughter if he catches up. The film opens with Crystal Benson’s gangster husband, Steve Blackford, roaming around unseen in the shadows of her house. She senses he is there, but as she roams the house looking for him she can’t spot him. He has found her in a small New Mexico town, even though she has a new identity, after spending 18 years in prison for supposedly murdering her. He is now out on parole.

Crystal makes a tape recording explaining her past, as she relates to when she was a 19-year-old and met a charming man at a dance. Her mother warned her that Steve was a gangster, but she fell in love and married him despite. She soon was living in luxury, as her hubby was a collector for the mob. When she found out through the newspaper headlines that her husband murdered a cop, she decides to run away from the mean-spirited man. But he refuses to give her up. After a year or so passes Steve, who beat the murder rap, accidentally sets off some explosives in his place. This killed the lady he was spending the night with, but the cops think the unidentified woman is his wife and he killed her to stop her from talking. He is sentenced for that murder, as Crystal refused to exonerate him. She starts a new life for herself in Candlewood, New Mexico, has his child, Randi (Murphy), and becomes a successful newspaper publisher and respected citizen. But she has told no one of her past, and is deeply worried about what others would think of her if they found out the truth.

In the present, we view Steve as he pushes his way into her home posing as her brother. He charms Randi, extorts money from Crystal, and is bent on ruining her life. She asks her pilot boyfriend, Josh (John Howard), to fly her and Randi to Mexico to escape from her insane brother — which he agrees to do, but is puzzled about what she is afraid of.

When a robbery and murder is committed Sheriff Lafe (Buchanan) arrests a local Mexican kid who is known to have a temper, Rudolfo. But the sheriff soon traces the murder weapon to Steve. The climax results in Crystal being able to keep her lie intact as Steve falls to his death in the Indian burial ground, as the solid citizen still is caught by the dubious morality of her actions.

This revenge film was fast-paced and well-acted, but its story is too far-fetched to be completely convincing. 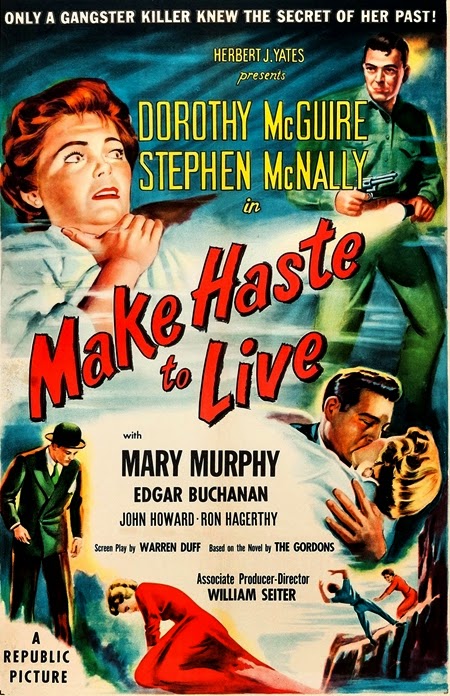