The always obstreperous Ken Russell (The Music Lovers/Listomania/Tommy) has come up with a wonderfully impetuous Freudian-like biography on turn-of-the-century (1860-1911) Austrian musical conductor and composer Gustave Mahler (Robert Powell). Powell obsessively plays him with proper conviction. The troubled life of the neurotic Jewish composer who converted to Catholicism to appease the anti-Semites in Austria, especially the powerful voice of Cosima Wagner (Antonia Ellis) so he can gain career advantages. This is carefully scrutinized by Russell through his imaginative dream sequences. He elaborately uses a tableaux series of cinematography to get into the maestro’s head and into his music and into his perplexing marriage with Alma (Georgina Hale), who is played by Hale with a succinct elegance.

Dreams and fits of anguish, interspersed with flashbacks to Mahler’s pressured upbringing by his peddler Bohemian father who demanded he succeed for the family’s honor; and, then to further flashbacks of other important events in his creative life. This biopic is done with strong emotional feelings that make it clear that Mahler was someone who struggled with his musical genius. He also struggled with his hostile surroundings (always the outsider), and with a wife who told him “You have succeeded in taking the tunes out of me.”

The film opens with the kind of excessive dream sequence one comes to expect from Russell, where the composer’s house on the lake is in flames and his wife is seen on the rocks tightly wrapped in white linen struggling to free herself from the garb. She is crawling on the rocks to a bust of Mahler, which she embraces. Mahler tells his wife that the dream — which she did not look kindly upon, thinking it was just another one of the ways he always uses to put her in place — is actually a homage to her. He tells her: “She is the living creature struggling to be born.” His bust on the rock he says, signifies that “I was the rock and the rock was me.” The visionary dream is evocative of the music he created for the 1st movement of the third sympathy. It is interpreted by Russell in a way that is highly complimentary to the composer whom he greatly admires.

We pick up the Mahlers on their last train ride before his death, where the famous composer of ten symphonies (nine numbered) is returning from a conducting stint at New York’s Metropolitan Opera with Arturo Toscanini. The hostile press forced his resignation in 1907 from his prestigious conducting postion at the Vienna State Opera. We learn from a reporter on the train that Mahler might have been forced to leave The Vienna State Opera because of anti-Semitism, though Mahler claims he left for a change of environment and is returning for the same reason. He also emphatically says, “I conduct to live; I live to conduct,” indicating that it is his composing that makes life interesting for him. He thereby contemptuously dismisses the reporter.

Mahler recalls his timid youth, where he met a puckish sort of man in the woods (Pickup) who saves him from drowning and teaches him an invaluable lesson about music “The man who doesn’t live in nature can’t write a true note of music.” Mahler, since that time, sees his compositions as a tribute to the music of the spheres; and for him, a symphony will always be a farewell to love.

When asked by a smug army officer named Max (Richard Morant), who is a suitor of his wife, “What religion are you?” He replies, “I’m a composer.”

What gives the film force and a sense of inspired madness, are a few very inventive scenes. At a mental institution Mahler visits his dear friend and fellow student at the Vienna Conservatory, Hugo Wolfe (Collins). He addresses Hugo as his majesty and continues this charade by allowing himself to be grilled by the lunatic, accepting him as if he were the real Emperor Franz Joseph. He comes away from this visit realizing that he can only get places musically if he converts, since his religion is holding him back in the anti-Semitic milieu of Austria. The conversion scene becomes the most powerful and outlandish one in the film, as it is filmed as if it were a silent movie changing into a talkie at the moment of the conversion. There are symbols galore: of crosses, Jewish Stars of David, Nazi insignias, money and fire gods. Cosima is depicted as a Nazi and he as a willing servant of hers. He is seen as prepared to go into a cave and slay the dragon of the old gods to gain her approval, as she smilingly tells him when he has slain the dragon: “You are no longer a Jew, you are now one of us.” He will then eat the non-kosher pig meat and drink a glass of milk with it, completing his conversion to Christianity and acceptance into Austria’s society.

After Mahler’s real conversion, he will say it reminded him of having a toothache. For Mahler man is his own God, and God shares his love with us all. But this conversion affected him greatly and continued to eat away at his famished psyche, already terribly damaged from a childhood of constant nagging by his overbearing father.

Mahler’s a musical genius but he’s always insecure and troubled, never happy and always irritable and petulant. He grew up to be a most unpleasant person and a sexist. That is the impression of Mahler that Russell convincingly leaves us with. Mahler at one point admonishes his wife, choose between me and Max. But do not choose me because of duty, duty always destroys. The choice in marriage must always be love.

It is a film that plays at times like a soap opera. But Mahler’s music is refreshingly digested, admittedly a music for acquired tastes but a music that gives the film its resonance. The film also plays like Visconti’s Death in Venice gone astray, where homo-erotic shots are coupled with coarse hetero-sexual shots.

There is always passion in Mahler’s Germanic symphonies. From his renown 6th Symphony, there were the evincing childlike death cries, as coincidentally one of his little girls died soon afterwards and he received one of his many heart attacks after the symphony was completed.

Though the film like Mahler’s music is clearly not for everyone it, nevertheless, rises in a crescendo of brilliant spectacle to overwhelm the usual timid biopic. 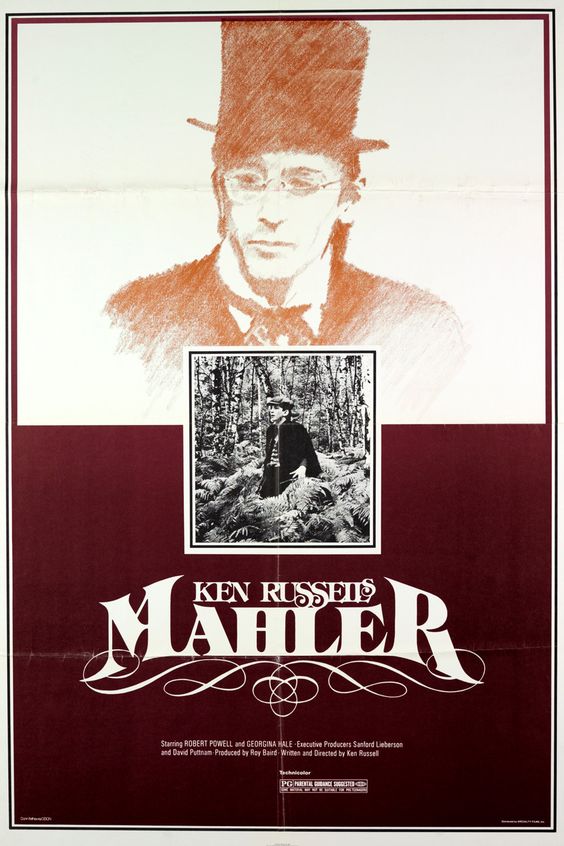