Scottish actor/writer/director Peter Mullan’s The Magdalene Sisters is a powerful eye-opening drama about the true story of the Catholic Church’s abuse of women under their charges and their modern practice of slavery all in the name of religion. The depictions of abuse are taken from composites of the many women who suffered at the hands of the church and testified about their treatment. This winner of the Golden Lion at the 2002 Venice Film Festival chronicles four or five years in the lives four “fallen young ladies” who were rejected by their parents and placed at the mercy of the Catholic Church in 1960s Ireland because of sex being viewed as a sin. Mullan has a bit part as a tyrannical father, who returns his frightened runaway daughter to the Catholic workhouse.

The film certainly points out how ugly the Catholic Church can be, but is by no means anti-Catholic as much as questioning if the church has learned anything from its past mistakes. It is interesting to note that the church is still in denial about its wrongdoings, as the Vatican has furiously condemned this film instead of welcoming it with open arms for exposing unacceptable activities. It seems that the arrogant church leaders still have not had the lessons of the recent widespread pedophile priest scandal sink in. This torturous story, one that is well-executed and uncompromising but hardly entertaining, needs to be told. Its aims of women being sacrificed and placed in servitude because of rigid dogmatic religious practices were similar to French director Jacques Rivette’s 1966 The Nun (set in the 18th century) and Iranian director Jafar Panahi’s 2000 The Circle (set in the present). There were also countless women-in-prison Hollywood films similar in nature but few were as intense or as moving. What is astonishing about The Magdalene Sisters, ironically an order named after a sinner now revered, is that it takes place in present times in a civilized Western democratic country. The real events happened in Ireland from the 1960s until 1996 when an estimated 30,000 young women, frowned upon by their families for having committed sexual sins, were sent away from their homes to earn penitence working in profit-making laundries run by the Sisters of Magdalene Order and other orders. It is astonishing to think that these obvious abuses were carried on until 1996 and the world didn’t seem to know or care about these young women, even though it came at a time when women’s liberation was already established as a world-wide movement.

The film shows how three of the girls together enter the Catholic Church sponsored laundry detail as punishment for their perceived sins. For atonement they are forced to work under harsh conditions without pay and with no end in sight (many of the imprisoned women are elderly). In the meantime the greedy sisters eat well and force their will upon the belittled girls with daily brow-beatings, making them think they are whores who must atone for their sins so that they can go to heaven. The film opens in the outskirts of Dublin in 1964, and a priest is passionately playing the bodhran at a traditional Celtic wedding. The shy Margaret (Duff) is lured to an attic room and is raped by her cousin. Her shamed father sends her off the next morning to the Sisters of Magdalene dormitory as punishment and nothing happens to the lad. The second girl is Rose (Duffy), who gives birth to a child out of wedlock she adores and is forced by her unfeeling parents to give up the child for adoption and is further sent by them to the sisters for punishment. The third girl is Bernadette (Noone). She is living in an orphanage and even though she’s had no physical contact with boys, she’s viewed as a temptress and therefore the nuns send her to the laundry for just flirting and thinking about boys. She’s more tough-minded and less genteel than the others, as she’s no angel but hardly deserving of such a prison confinement. These girls room with a mentally challenged Crispina (Walsh), who has been in the dormitory ever since she gave birth to a son two years ago whom she adores but had to give him up to her older sister to raise.

The women were kept isolated from the world, as there was no contact with their family or friends. They were routinely punished with floggings or if they ran away had their hair clipped when returned. They were verbally humiliated and some of the spiteful sisters played nasty games with their heads. The naked women in the shower were judged by the cold-hearted sisters for who had the biggest and smallest breasts, and who had the most hair by her private part (this was the most effectively provocative visual shocker in a long laundry list of abuses uncovered). In charge of all this evil was Sister Bridget (McEwan), a mean-spirited and mercenary tyrant who ran the place like a deranged prison warden. Everything about the institution smacked of hypocritical sanctimony. The nastiness was so rampant, it was even carried out in the smallest of details. Rose was forced to be called Patricia by Sister Bridget because another girl was already named Rose.

Though the film might be slotted into that genre of prison films, ones that a big name star like Cagney starred in back in the 1930s, this one is more on message and less on pleasing the viewer with escapism or star power. To show what Mullan thought of those Hollywood genre depictions he has the women watch The Bells Of St. Mary’s on Christmas Day, as Sister Bridget is moved to tears at Ingrid Bergman’s embarrassing phony speech about why she became a nun while the girls stare icily at the screen with disbelief at the fiction.

I believe this film gives the Catholic Church another chance to examine itself in public and try to save its soul before it is too late. For this film to be so viciously attacked by the Catholic League just because of its subject matter, puts the church in the same intolerant position as the much maligned Islamic fanatical fundamentalists. Though the Catholic Church is capable of doing good it has also done some horrific things that it should confess to and ask forgiveness for. It seems the only justice the living victims of this laundry scandal could get, is through civil law suits. I understand many such claims have been filed and that the church has so far been forced to pay millions to settle. But if this is how the church reacts to a film that probably, if anything, understates its case, I wonder what other skeletons they have behind their church doors that they fear being exposed! 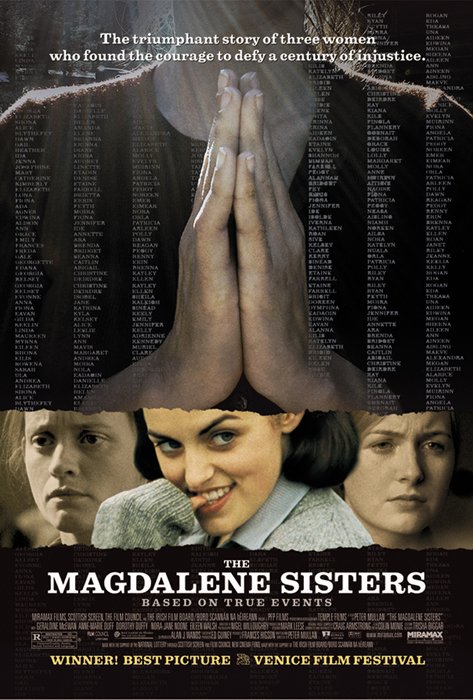