Taiwanese-born Ang Lee’s (“Crouching Tiger, Hidden Dragon”/”Brokeback Mountain”/”Hulk”) less than captivating spy and kinky boudoir story is set during the WW II-era of Japanese-occupied Shanghai that spans the late-’30s and early-’40s; it’s based on a 54-page short story that Eileen Chang wrote beginning in the 1950s and was not finished until the ’70s. The uneven script is by Wang Hui Ling and James Schamus, and it’s a Chinese language film demanding English subtitles. Its major faults are that it spends too much time going into detail of bourgeois Chinese married ladies playing mahjong and chugs along at such a slow speed it nearly put me to sleep despite its graphic sex scenes and wish to get me emotionally involved in the horrors of the occupation. Middlebrow director Lee just didn’t instill this political dramatization with the requisite passion to crossover to this viewer, as this one proves to be one of his lesser efforts.

It opens in occupied Shanghai in 1942 and flashes back to 1938. Wong Chia Chi (Tang Wei) is a shy, abandoned university student whose father fled China to England. She goes along with a friend who volunteers to join a drama troupe started by the charismatic and zealous patriotic Kuang Yu Min (Wang Leehom). His radical plan is to assassinate Mr. Yee (Tony Leung), a powerful political figure (head of the secret police) and cunning Chinese businessman who is collaborating with the Japanese. Wong is recruited to pose as a rich woman of leisure married to a Hong Kong import-export businessman named Mak. Through connections she’s invited to play an ongoing mahjong game with Mrs. Yee (Joan Chen) and her materialistic-minded shrewish lady cronies. Her handsome, steely-eyed hubby, Mr. Yee, has earned a rep as a ruthless supporter of the puppet government, who is going after the resistance with a sadistic vengeance. Wong, using her newly gained contacts and acting experience, is to lure the ever-cautious Mr. Yee, who goes nowhere without his bodyguards, into an area where her comrades can kill him. The virgin Wong loses her cherry to prepare for her sexual encounters with Mr. Yee, but is not prepared for how kinky, controlling and demanding are his erotic wants. This scenario goes on for a needlessly long 158 minutes, as Wong tries to get over as a role player and must deal with being shagged–the sexual intimacy of the story overcomes all else and the film flounders trying to say something that really doesn’t mean much at this point about relating sex to politics–that love can be a corrupting force. Aside from the extended depiction of rough sex to keep one’s interest aroused, there are left only dead spots when leaving the erogenous zones. In the end, this so-called steamy melodrama, more soft-core porn than arthouse fireworks, is too cold to warm the heart and too unsatisfying to be more than a cautionary tale about being compromised by one’s lust. 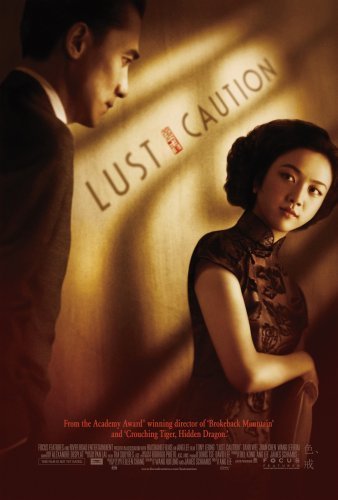