The usual Woody Allen (“Annie Hall”/”Sleeper”) antics in this sometimes funny spoof of War and Peace, featuring a string of one-liners and sight gags, self-deprecating humor of the neurotic comedian, and many quasi-intellectual questions about God, love and death. This one is inspired by Tolstoy, Dostoyevsky, Ingmar Bergman, The Marx Brothers and S.J. Perelman. It’s set in the Russia of 1812, where Boris Grushenko (Woody Allen) is a coward forced to leave his Russian village and fight as a patriot against Napoleon’s invading army. His heart burns with love for his beautiful cousin Sonja (Diane Keaton), but she desires his warrior brother Ivan. Sonja’s someone who loves to debate philosophical moral points in a convoluted way. When Ivan rejects her to marry another, Sonja on an immediate rebound marries a boring, elderly, odoriferous, herring merchant Leonid Voskovec (Sol Frieder). While Boris through luck becomes the sole Russian survivor of a massacre by hiding in a canon, and is rewarded with many medals. Sonja takes many lovers and feels nothing when her hubby dies. Upon Boris’s return from the front he romances the sultry widow Countess Alexandrovna (Olga Georges-Picot), who tells him”You’re the greatest lover I had.” Boris counters “I practice a lot when alone.” Sonja hooks up again with Boris, and convinces him to help her assassinate Napolean in Moscow and thereby end the war. Things go wrong and Boris is caught and set to face the firing squad, while Sonja escapes to live for another day.

The film has many sight gags and slapstick antics that include the Grim Reaper (garbed in a white bedsheet), a meeting for village idiots in Minsk, Boris in a gun duel with the jealous lover (Harold Gould) of the Countess, an opera setting (where Boris and the Countess flirt with each other from behind fans), and an ongoing ridiculous metaphor about wheat. The funniest one-liner was when Sonja says “Violence is justified in the service of mankind.” Boris counters “Who said that? Attila the Hun.” The silliest one-liner is perpetrated by Sonja to Ivan’s widow. Sonja: “I decided we should share Ivan’s letters. Do you want the vowels, or the consonants?”

It’s not one of Allen’s great films. The comedian’s antics clearly resemble Bob Hope in this film, perhaps, even more so more than his others. It ends with Allen stating that God’s an underachiever and with Allen, as the jester, gayly dancing the mazurka after Death. 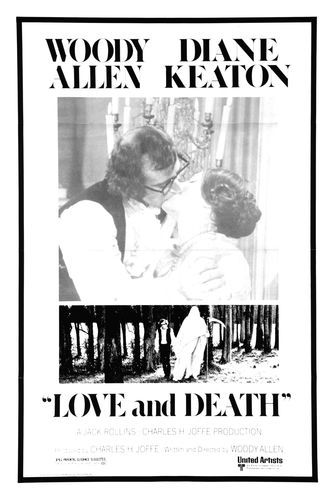