“Unable to come up with absolute truths, what we get are perceptions of the truth.”

The art history investigative documentary directed by the Danish filmmaker Andraes Koefoed (“The Arms Drop”/”Ab”) and co-written by him and Andraes Dalsgaard tells the engaging inside story behind the Salvator Mundi, the most expensive painting ever sold at $450 million, which is claimed to be a long-lost masterpiece by the Renaissance artist Leonardo da Vinci. This film produced with the support of Danish Film Institute, Swedish Film Institute, Nordisk Film & TV Fond. It tries to determine according to the facts delved into by art experts if the painting is indeed a Leanardo. Unable to come up with absolute truths, what we get in the end are only perceptions of the truth.

It begins with Alexander Parrish, a self-described “sleeper hunter” (a “sleeper” is a painting offered at an auction that turns out to be worth more than was originally thought) tells us he and his colleague, Robert Simon (an art dealer specializing on old master paintings), bought in a New Orleans auction house, in 2005, for $1,175, a damaged Learnardo’s lost painting of Salvator Mundi, most likely painted by one of his apprentices.

The buyers brought the painting to the noted art restorer, the widowed Ms. Modestini, for what turned out to be a five-year restoration and evaluation (detractors claiming it thereby became more a Modestini than a Leanardo). After the National Gallery briefly consulted several da Vinci experts—who were far from uniform in their appraisal—the London art museum nevertheless included the painting in a 2011 exhibit, attributing it solely to da Vinci.

Art restorer Dianne Modestini without pause tells us that Salvator Mundi—a portrait of Jesus that sold in 2017 for a record-setting $450 million—was painted by da Vinci based simply on the appearance of Christ’s mouth in the piece.

The valued picture went on sale despite more experts thinking it was a fraud than the real thing. One art critic Jerry Saltz not only called it a fake but “a piece of crap.” The founder of the F.B.I.’s National Art Crime Team is suspicions of the painting’s authenticity. Other experts see too many red flags for acceptance.

There’s suspense in the build-up toward the 2017 Christie’s auction. The event even draws the actor Leonardo di Caprio to come to the auction and check out the disputed art.

Though publicized as the “male Mona Lisa,” most art experts call it a mediocre painting. Koefoed misses chances to look further into its authenticity . Instead in the last episode, he focuses on characters like the shifty shipping magnate Yves Bouvier. He purchases art for Russian oligarch Dmitry Rybolovlev, who was pissed when he found out that Bouvier scammed him by marking up the prices by millions and stealing the money for himself.

According to the filmmaker, it matters far less if the Salvator Mundi is by da Vinci than whether the right people can vouch for it.

The Art World, according to Koefoed, seems to be all about money, which transitions to power, and whatever you think the truth is doesn’t seem to really matter. 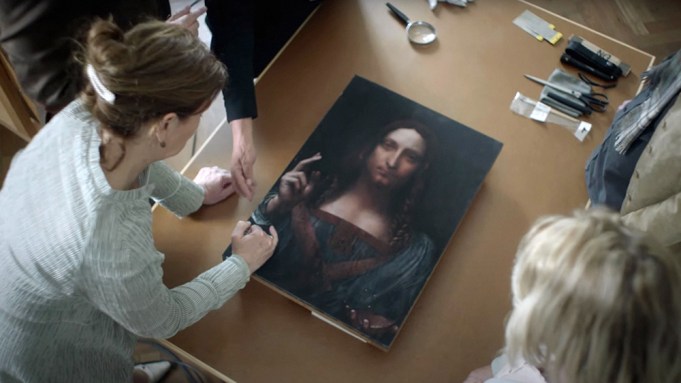 DEAD HEAT ON A MERRY-GO-ROUND

MURDER OF DR. HARRIGAN, THE