“Loophole” can be pegged as a film noir, though it plays more like a typical 1950s crime caper. The film opens like a documentary, as a voiceover tells us a group of bank examiners are about to make a routine audit of a Hollywood bank. Herman Tate (Beddoe), a bank teller himself, is disguised as a bank examiner and sneaks in undetected with the examiner group. He then goes to the head teller’s window of Mike Donovan (Barry Sullivan) after an initial audit by one of the real examiners and asks to recheck the big bills while his partner Vera distracts Mike, asking him if she can open an account at his teller’s window. Tate steals the $50,000 in those few seconds and walks out of the bank unnoticed. At the end of the day, which is a Friday, a worried Mike notices the large sum of money he is short, but doesn’t report it until Monday.

The poignancy of the story is in how an innocent, hard-working person like Mike, could have his whole life turned upside-down over an incident where he makes an error in judgment. When he tells his boss (Lummis) about it, he has no explanation why he didn’t report it immediately except he couldn’t understand how so much money was missing. This slip-up is why Mike becomes a noir protagonist, though he doesn’t have the dark side to his character this genre usually calls for. His wife Ruthie (Malone) accepts his story, trusting him completely. Even the bank manager and the F.B.I. agents who question him, think he is innocent. But his life turns into hell when, even though he is not charged with anything, the bonding company that must insure him cancels his certification and the bank is forced to fire him. Not only can’t he get bonded so he can get another teller’s job, but the bond company puts a mean-spirited insurance investigator on his tail, Gus Slavin (Charles McGraw). Slavin is convinced Mike is guilty and tails him everywhere, and when Mike gets a job he informs the boss on him and Mike is always promptly fired.

Finally, a taxi company, run by a tough-minded boss (Reeves), refuses to fire Mike. The boss asks Slavin: “If you are so sure he stole the money, why isn’t he in jail?”

Mike gets a chance to clear his name when he accompanies his wife to the bank they just opened up an account in, and he recognizes the teller as the one who acted as the bank examiner during the heist. He then foolishly goes after him and his girlfriend partner, not waiting for the F.B.I. men to take over the pursuit as he promised his wife. After the couple lure Mike into a trap, Mike is able to somehow stumble out of the beach house just as the police arrive to find Tate dead and arrest Vera with the money. The film ends on an unclear note as Mike is happily back at his job, but Slavin is seen through his workplace window still hounding him for no logical reason. I’m not sure what that is supposed to mean, except that life for the Donovans will never be as rosy as it was when his day started on that Friday morning in April before the bank got robbed. 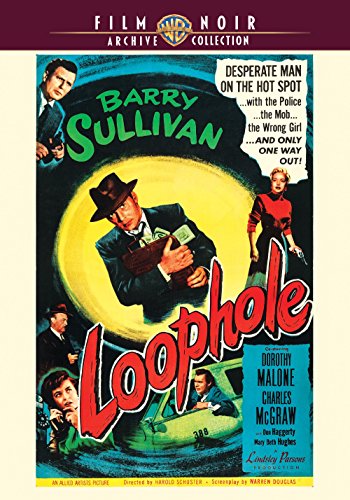