Loons is a wannabe SNL type of satire on the Salem Witch Hunt by aspiring filmmaker Michael Legge, who casts lame actors and leaves the film with an unsatisfying amateur look. The sophomoric comedy routines make it seem more like a film school project than a movie one would pay to see. Though in all its silliness, it might get a few chuckles from the likes of an unquestioning frat crowd falling for its dumb antics in between guzzling down some Buds. If it had any chance at all to be effective, it should have been made during the early 1950s witch hunting HUAC hearing days. Having a 17th century sense of humor also might help the current TV generation laugh up a storm over a witch returning from the dead, which sounds like the idea for another bad network sitcom comedy.

The film opens by showing on a storyboard Judge August Loon in a 17th century witch trial ordering Hepzibah Crowley to be burned at the stake for her witchcraft. The witch places a hereditary curse of lunacy on the judge and all his male descendants. Judge Loon soon goes insane, imagining he’s watching TV in the New England of the 17th century and is placed in a mental asylum. The curse continues through the ages, but in modern times the family disbelieves the curse as they try to ignore mentioning it hoping in this way it will vanish. But the curse continues onto the present when Jeff Coukos, a Loon blood descendant, learns of the curse for the first time when he brings the girl he wants to marry, Kerry Grant, home to meet mom (Baxter). Mom goes bonkers and warns him not to marry, telling her hematologist son if he marries he will go insane because of the curse and if he has a son the curse will continue. Mom also tells him for the first time about his older brother Jasper, who has been in a mental hospital all his life because he was born insane. Visiting Jasper at the hospital where he’s treated by Dr. Fiasco for thinking he’s a puppet being manipulated by strings, the skeptical Jeff now becomes a believer in the curse. Kerry and a suddenly cured Jasper, figure the best way to end the curse is to raise the body of Hepzibah from the dead and get her to retract the curse. In this color version part of the film, a number of skits are executed in the hopes of mining comedy from the setup as the film also tosses out a few obvious barbs at those who accuse witches and those who put curses on their accusers.

The parody never felt like it was going anywhere, as it continued spinning its wheels in place without moving. In one of the film’s stabs at comedy an oily insurance agent after he puts the returned witch in a trance mentions “Never underestimate the power of boredom.” This film makes such boredom a virtue. 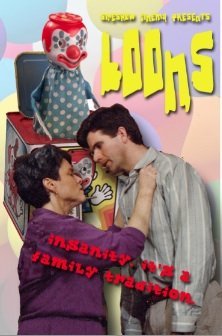 TWO ON A GUILLOTINE