A fast paced cartoon farce where animated characters intertwine with real actors. The film pitches its story as a smackdown between those old rivals Bugs Bunny and Daffy Duck. Joe Dante (“Gremlins”/”Small Soldiers”) directs and though not receiving writing credits, in all probability, played a large part in the screenplay, especially, since credited writer Larry Doyle departed before the film was finished over artistic objections.

Brendan Fraser plays D. J. Drake, a WB security guard and an aspiring stuntman for the Hollywood actor Brendan Fraser. Jenna Elfman plays Kate Houghton, a WB’s VP in charge of comedy. At the film’s opening board of directors meeting with the projected stars for their next picture, Bugs Bunny and Daffy Duck, the suits are sitting at a long table with the Warner Brothers presiding. The conference concludes with Kate yielding to the pressure exerted by the rabbit and the other studio honchos to fire the duck. There’s some obvious “adult” comedy about studio interference–perhaps an aside on how the studio cut Dante’s Small Soldiers and ruined it. Kate has also fired the security guard for the inept way he tried to remove the duck from the WB lot when he refused to leave peacefully, but doesn’t realize that his father is the studio’s biggest star Damian Drake (Timothy Dalton) and this firing will come back to haunt her.

Daffy, who is now without his sidekick, partners himself with DJ. At his father’s house, DJ makes the discovery that his father, famous for playing suave international spies onscreen, is in real-life a suave international spy and has been kidnapped by the evil Mr. Chairman (Steve Martin) of the darkly purposed Acme Corporation. Before losing contact with his father, DJ’s told about the Blue Monkey Diamond and how it must be found before Mr. Chairman does in order to save the world from his evil designs. Since DJ can’t get Daffy to stop tagging along, he agrees to take him along for the ride. The plan is to go to Las Vegas and make contact with his dad’s spy partner Dustry Tails (Heather Locklear), who is working undercover as a steamy cabaret singer. When there, Dusty clues him in to a special card–the queen of diamonds–and a riddle that must be deciphered of where to find the mysterious diamond.

But, in the meantime, the studio brass tells Kate the comedy is not working without Daffy and they mention if she doesn’t get the duck under contract by Monday–she’s fired. The cocky, carrot-chomping bunny is all for that and goes with Kate to DJ’s father’s house after tracing the duck there, and when learning about their Las Vegas weekend escapade–they take Damian’s other car in pursuit, which happens to be a trick James Bond-type of spy car.

The foursome after escaping from the Chairman’s hired cartoon goons stumble across the Nevada desert and come upon a secret government laboratory where DJ’s mother (Joan Cusack) does experiments on otherworldly creatures in a place known as Area 52. The sophisticated comedy in this skit should mostly appeal to adults, as it’s mentioned that this location is so top secret that Area 51 was invented just to hide it. Further travails continue in an outer space location, which is filmed like a Twilight Zone experience and revisits films like Ulmer’s “The Man From Planet X.”

Soon after DJ and Daffy team up with Kate and Bugs, as they head to Paris and the Louvre to take in its Mona Lisa. In a chase sequence, the cartoon characters go in and out of the paintings of Seurat and Dali and Toulouse-Lautrec and Edvard Munch’s “The Scream,” and finish their Paris excursion at the Eiffel Tower to rescue the kidnapped Kate; then it’s on to Africa to find the magical diamond. The diamond is to be used by the Chairman to transform the human race into monkeys in order to work as cheap labor for him and then they will be turned into humans again to buy Acme’s products.

The film’s specialty is stuffing every scene with a multitude of references such as a variety of spy and sci-fi films, cultural events, mild swipes at the movie industry, and by utilizing a host of cartoon characters from Porky Pig and Elmer Fudd to the Tasmanian Devil and Yosemite Sam and Wile E. Coyote in Road Runner cartoons. There’s also a desert scene where Wal-Mart appears and is poked fun at, as Bugs asks “Is it a mirage or just more product placement?”

Since I’m no big fan of cartoons and found hardly anything to chuckle over and wasn’t overwhelmed with the personal nature of Dante’s project–I left the theater as unimpressed as if I saw a straight Looney Tune. This 90-minute film packs so much extraneous stuff into its typical short-attention span animation that it leaves everything up in the air, though it probably works best if you are into following the logic of cartoons. It’s undoubtedly a colorful slapdash chase film packed with frenetic energy and lovable characters who please with their many pratfalls and their usual cartoonish slapstick antics and flatulent jokes. That should be enough to appeal to children, while its nostalgia, in-jokes and recondite references might appeal to cinephiles. But all that excessive baggage on board wasn’t my cup of tea, as I never seem to get my thrills from seeing how many Jerry Lewis references I can get. 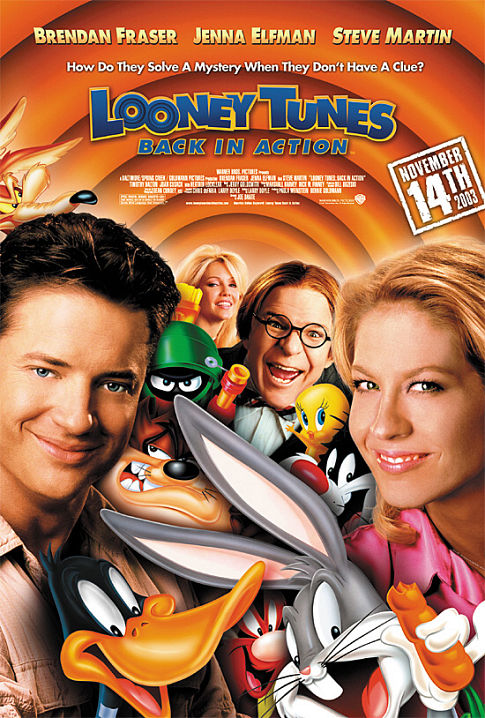