Shaun Peterson directs a dark comedy that revolves around the humdrum lives of suburban Missouri residents Ryan, Amy, and Todd. It’s penned by Connor Ratliff, who also is the film’s star.

Todd and Ryan have been best friends since childhood. In college Todd introduces Ryan to Amy, the two marry. The twentysomethings remain close friends, as they’re both movie fans and “Star Wars” geeks. Ryan, the father of two children, is stuck in a dead-end office job and is reprimanded for work-related deficiencies by his boss. Amy works in a medical office as a receptionist, and the harried wifey complains hubby is more interested in Star Wars than taking care of the kids. Ryan is so obsessed with Star Wars he created a website about the film. Todd works as a clerk in a video store and lives at home with his parents. He’s a nerd, a junk food eater, has repressed his longtime desires for Amy and is nagged by his overbearing mom for not dating. Things begin to burst for the threesome when Ryan gets fired, Amy seeks counsel for her marital problems with Todd, and Todd mistakes his encounters with Amy for a romance.

It’s a poignant, funny and sad tale. At first glance it seems to be goofing on the clueless nerds as they make their way through their drab surroundings, but that gives way to showing love for these pained characters who are lost in both their fantasy and real worlds. They live for the next film, to walk through a Wal-Mart, or to down a can of Sprite. Their emptiness reflects the banal landscape they are surrounded by; their emptiness becomes unbearable as they must face a broken-down marriage, challenges to their friendship and an unpleasant look at what they have become. How they all handle it is amusing but also depressing.

Living in Missouri is a trip into the bosom of white Middle America that is filled with humanity and love for those who usually don’t get much love, and is worth seeing as a slice of life film that hits a raw nerve.

It won the Best Feature at the Seattle Underground Film Festival, and numerous other festival awards. 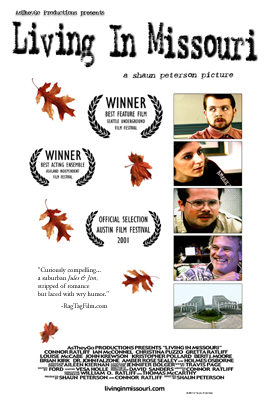