Alexander Hall (“I am the Law”/”Here Comes Mr. Jordan”/”Forever Darling”) directs this slangy Broadway wiseguy film based on a Damon Runyon story, written two years before the film’s release. Paramount cashes in on the value of Shirley Temple as a hot property borrowed from Fox. Shirley was to use Little Miss Marker as a springboard to her future super stardom. I saw the colorized version.

Big Steve Halloway (Charles Bickford), who owns the race horse “Dream Prince,” falsely lets it be known in the right circles that he bet $10,000 on “Dream Prince” to win even though he knows the horse will lose. He’s told if he “speedballs” the horse with drugs one more time, the horse will die–and he refuses to drug it. The story revolves around Martha Jane (Shirley Temple), left by her widowed compulsive gambler father (Edward Earle) as a marker for a $20 bet on Dream Prince. When the horse loses, he commits suicide and big-time bookie Sorrowful Jones (Adolphe Menjou) keeps the sharp little girl he held as a marker and who is dubbed by the racing crowd as Little Miss Marker. The gamblers are under suspicion by the law and thereby turn over ownership of the horse to Miss Marker to scam the authorities. Meanwhile the cute youngster is looked after by racketeer Steve’s beautiful nightclub singer girlfriend Bangles Carson (Dorothy Dell), who is really in love with Jones. Bangles reads to Marthy about Arthur’s Knights of the Round Table, while Jones assures Marthy there is a God and shows her how to pray. Marthy melts the hearts of the hardened gamblers and gets them under her spell to change their crooked ways (they toss away the speedballs) and helps bring Jones and Bangles together, as they marry to provide the little moppet with a proper home.

Little Miss Marker was a major box office hit. Shirley would go on to star in a total of forty-four films as a child, from 1931 to 1940. Little Miss Marker was remade as Sorrowful Jones (1949) starring Bob Hope and Mary Jane Saunders, in 1963 it was remade as Forty Pounds of Trouble starring Tony Curtis and Claire Wilcox, and again using the original title in 1980 with Walter Matthau and Sara Stimson. But the original remains the most memorable of all of the versions because of Shirley, there was no one quite like her. 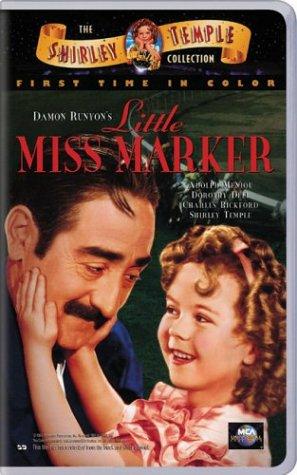