An exciting thriller from Spain. Joao (Sergi López) is a Portuguese young man now living in Barcelona. He’s a traveling salesman of musical cassettes and videos, who has a steady route servicing the bars on the road somewhere outside of Madrid. The weary Joao has a short-styled haircut, side-burns, an earring, and says his job requires long hours, lots of driving, and the pay is not that good. Joao meets a well-dressed, nervous, attractive, middle-aged woman, Berta (Carmen Maura), in a roadside restaurant, who begs him to take her to Lisbon. She remains mysterious about why she’s so desperate to get there, but says her car broke down and she must get there in a hurry.

At first Joao refuses, even after she offers money, herself and the valuable necklace in her purse. But he relents when he sees how desperate she is and that there are police in front of the restaurant, as he’s alarmed that he found a gun in her handbag and just wishes to get her out of that tight spot. Joao doesn’t realize that the police have been called to the scene not because of Berta but for a car accident nearby where a married couple and their daughter were killed.

Joao is afraid he’s gotten into something he doesn’t understand, so at a rest stop he calls the emergency number he found in Berta’s handbag. Soon her son Carlos arrives by motorbike from Madrid and then her daughter Verónica appears with her grand-pa Aurelio and the wealthy families’ bodyguard Bruno. The family does not want Berta to go to Lisbon, while she’s annoyed with them and insists they leave her alone.

It turns out that the family killed in the car crash was known to Berta. The head of the family, Avaro, is the Portuguese business partner of her corrupt husband, José Luis (Federico Luppi). Berta claims it was not an accident but Avaro was killed by her husband. It was over a loan José Luis received from Avaro for a supposedly lucrative land deal that was contingent on politicians being bribed to pass certain zoning ordinances, but the deal went sour and Avaro was calling for his loan to be paid back even though José Luis couldn’t raise that kind of money. Avaro threatens to expose his partner to the authorities unless he gets paid. Berta has with her a cassette Avaro made of being tortured not to squeal, and she also has a key to deliver to Avaro’s friend in Lisbon in case anything happens to him.

The lonely road, the glare from the harsh sunlight, the fear Berta has for her ruthless husband, all lend an eerie atmosphere as the story builds to its surprising conclusion. Berta is a woman trapped in a bad marriage and burdened with a family of strangers. Berta’s only hope is for the bewildered Joao to rescue her from her evil husband. Joao is discontent with his marriage, his job, being Portuguese, and he thinks that all that matters is having money. But when bribed by the family to leave Berta, he refuses. Things become more complicated when José Luis shows up.

Carmen Maura is one of Spain’s leading actresses and gives a stunning performance as the lady-in-peril. Sergi López is in a noirish character role, of the poor sap sucked into a drama that’s beyond his imaginings. Sergi does a nice job of showing that despite his bewilderment his intentions are to do what’s right. Federico Luppi is a distinguished veteran actor, whose white mane of hair and chiselled aristocratic good looks always give him a certain screen charisma. Federico makes his villain role a layered one. What he will do to stop Berta becomes the focal point of this tense story.

Director Antonio Hernández wrote the novel the film was based on, and co-scripted the screenplay with Enrique Brasó. Cinematographer Aitor Mantxola does wonders with all the daylight outdoor shots, as his camera gives the suspense story an intriguing look. Though the acting is crisp, the storytelling is spellbinding, and the cinematic production values are really fine, I felt stranded on the road by the film’s conclusion. The chilling film was on shaky psychological ground, as it ran out of road to give the story more depth. 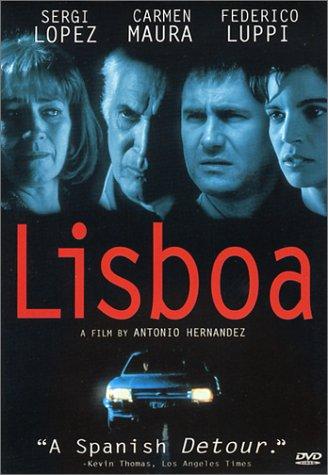