“A clunky art caper story made even more unbearable by its lethargic pace, its lack of wit, its heavy-handed attempt at comedy, and its pointless message about the power of religion.”

A clunky art caper story made even more unbearable by its lethargic pace, its lack of wit, its heavy-handed attempt at comedy, and its pointless message about the power of religion. The Light Touch was much too lightweight and ponderous and went on for too long for one to avoid noticing its many flaws. In particular, I felt put off by how slight the story line was and how this comedy thriller had so little going for it in the way of tension or credibility. It seemed as if this venture was undertaken only to promote MGM’s newest female star Pier Angeli. The sometimes gifted director and screenwriter Richard Brooks (“Blackboard Jungle“/”Cat on a Hot Tin Roof“) can write this one off as a misfire.

This b/w film’s best moments were derived from the beautiful location shots of Italy.

Sam Conride (Stewart Granger) has the light touch to lift valuable art pieces from museums. In the opening scene he steals from a valuable religious painting on loan from a church in Sicily. With insider help he sneaks it outside by hiding it in a tapestry and he then rents a boat from Carthage, which he sets on fire when he reaches Tunis. He then sneaks into Tunis to avoid customs and meets there his sophisticated crime partner Felix (George Sanders). The fire is a ruse so he can tell Felix the painting burned, as he hid it under his typewriter case and plans to double-cross his boss by selling it on his own to an unscrupulous art collector named Hawkley (Keating). Felix after putting up $8,000 to finance the caper planned to sell the painting for $100,000 to art lover collector Aramescu (Kurt Kasznar), with him taking hardly any risks but getting a big chunk of the profits. Which is explained as the reason for Sam’s betrayal.

Felix and his henchmen, the big and dumb bully Charles (Mazurki) and the gun-packing weasel-like Anton (Lloyd), don’t believe the painting burned and follow Sam wherever he goes and even conduct a thorough search of his hotel room. Though Sam stalls for time to sell the original on his own by playing on Felix’s greedy nature with his plan to hire an artist to make a number of imitations and sell them as the real one. This new plan goes into motion as he hires the struggling artist Anna Vasarri (Pier Angeli) who is naive, religious and honest. She must be some dumb broad to fall not only for his lines but to fall in love with him, as she unwittingly gets trapped in his crooked scheme and from photos makes a copy for $400.

But the sale of the original to Hawkley gets botched and the art expert he brought (Williams) to verify if the painting’s authentic, is forced by Felix’s strong-arm tactics into telling that Sam has the real painting. By this time Felix had talked Sam into marrying Anna so she couldn’t testify against him if anything went wrong with the scheme. Soon Anna learns that hubby is a thief and when the couple returns to Sicily, Sicilian detective Massiro (Calleia) tells her he knows Sam stole the painting and is willing to forget about prison time if the painting is returned the next day. It now becomes a question if Sam is really a good guy underneath his thick exterior and if religion kicks in as an influence, and also if he loves his wife more than he does the money. Where and how many times have you heard that plot device used before?

What I learned about art collectors is that they fall into four types: 1) Pure art lovers. 2) Ones who collect in order to gain respect. 3) Those who collect to decorate their homes. 4) Those who are only in it for the money. But more importantly, what the film confirms, is that without a good script there’s little chance for success. 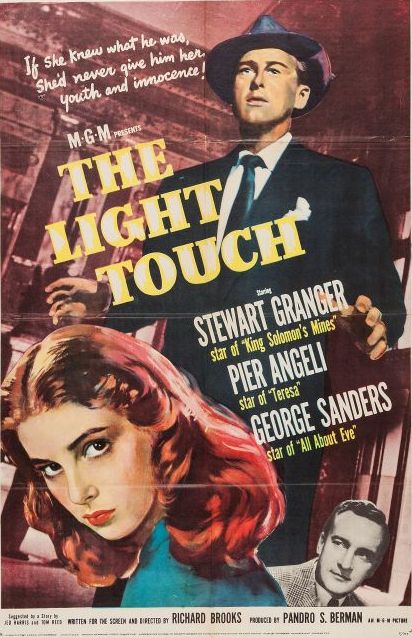