Stephanie Black’s educational no-frills documentary on how Jamaica has suffered economically under globalization, is not entertaining but certainly gets out its urgent message. The well-crafted documentary is narrated by Belinda Becker and is taken from Jamaica Kincaid’s 1988 non-fiction book “A Small Place.” It’s filmed as a sarcastic travelogue designed for those who wish to see the real Jamaica and not the glorified beautiful one seen by the tourists. Away from the luxury hotels where the tourists are pampered by a friendly staff, the real Jamaicans are experiencing poverty, a rise in crime, unrest, no waste disposal system, lack of hospitals, an outdated educational system and severe unemployment. Life and Debt focuses on how the International Monetary Fund has put the once successful Jamaican agriculture and industrial sectors into ruin by allowing for the country’s debt. The late former prime minister Michael Manley explains the IMF origins as coming about during 1944 to ensure the winners of WW11 that they would have enough capitol for rebuilding Europe. The IMF was not designed to help the developing countries, and when Jamaica became free of British colonialism in 1962 it had to fend for itself and because the rules of fair trade were rigged against them their home products became too expensive to compete in the world market. The big banks would only lend the needed money to help Jamaica if they opened up its border to foreign products and devalued its currency to encourage foreign investment. According to Manley, this policy ruined all productivity and caused Jamaica to be trapped in impoverished conditions where they couldn’t even grow their own food. The foreigners now control the country through debt. The amount of debt for such a small country is a staggering 7 billion dollars and through loans they must pay back to IMF at an exorbitant interest rate, they have become trapped into poverty. Jamaica now gets almost all its food by boat from Miami. The country can’t get out of this predicament unless the powerful countries like America, who have the most influence, change the IMF rules.

In one segment the film interviews female factory garment workers who work in a free-tade zone sweatshop and are paid $30 a week. They are clearly exploited, as both their pay and work conditions reduce them to be almost slavelike while their work ends up sold for a costly price in some of the most upscale places in America. They are not allowed to have a union. The sad fact is that companies like Hanes will move to other countries to get even cheaper labor, as these big businesses use the rules laid down by WTO to keep these Third World countries in the palm of their hands. Maybe that’s why the protesters took to the streets when the WTO recently met, as the mainstream news has not fully covered this situation as well as it should have. But if you believe the arguments in Life and Debt, you’ll now know why the rioters took to the streets.

Since the film is basically a lesson in how the economic system works to screw the Jamaicans there’s nothing sexy or exciting to view, but the power lies in viewing how these economic policies have a devastating impact on the Jamaican people and their culture. To contrast the lives of the tourists with the natives, the film follows an affluent tour group staying on holiday for a week to relax and enjoy the sun but without venturing out of their hotel to see the factory closings or see the hunger on the faces of a desperate population. The film is aimed at an American audience to get a a truer picture than they have been getting from their politicians and the media about globalization and how it helps those in undeveloped countries. “Debt” presents tragic conditions that counter the one-sided arguments about fair trade being the panacea for the world’s economic problems.

In a calm detached voice, Stanley Fischer a spokesman for the IMF explains throughout the film that the organization is helping Jamaica get started on their recovery and the pains they are experiencing will go away once the economic program gets on track. The Jamaicans see this as a lot of double talk, and all they feel now is the pain. As the unsettling images of the well-fed tourists with the starving Jamaicans is contrasted, one’s heart naturally goes out to the vics in this vicious capitalist struggle that ignores the masses so the wealthy can become even more wealthy in an obscene way. The documentary already played on PBS, where it belongs. It will probably only reach a limited theater or video audience, but its potent message deserves to be heard. Yet I must also say that emotionally the film was stirring as a work of liberal propaganda, but as an example of aesthetic cinema even the great Jamaican musicians playing in the background couldn’t make this baby hum. It probably has little chance to reach a wider audience than the usual suspects who gravitate to ‘human rights’ causes, and that’s unfortunate. 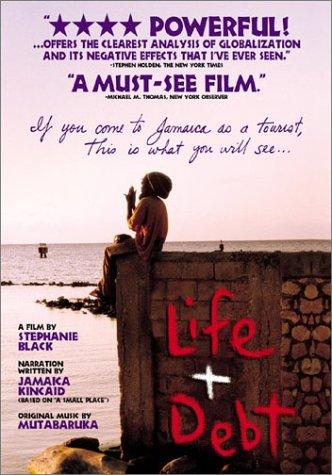