A flight of fancy film dedicated to all the Georgian warriors who lost their lives for the Motherland. The brilliant but maligned Armenian filmmaker from Georgia, Sergei Paradjanov(“Shadows of Forgotten Ancestors”/”Color of Pomengrates”/”Ashik Kerib”), co-directs with actor Dodo Abashidze this popular Georgian folktale myth, which is based on Daniel Chonqadze’s 19th century short story and on a nationalist Georgian folk song.

Divided by chapters, there’s in each vignette a striking colorful tableaux presentation depicting specific religious ideals to be envisioned and is worth seeing even if the film is slow moving and ponderous. Though visually beautiful its storytelling is incoherent, the characters are not clearly defined and the many cultural references are too esoteric to be understood by most. This makes it difficult for most viewers to fully know what’s going on in this nevertheless oddly compelling film–a personal one for the persecuted Paradjanov, that tells about hopelessness and injustice in a corrupt society. It’s a unique film experience, one that is visually satisfying even if its narrative may be unfathomable.

Shortly after a monarch of the remote kingdom in Surami builds the medieval Suram Fortress to protect his kingdom from outsiders it begins to collapse, as it is bonded together with stones, straw, and poultry eggs. Even while undergoing further construction to repair it, it still leaves the walls crumbling. Following the will of the people, the ruler resorts to consulting the local fortune teller (Veriko Andjaparidze) for advice and she vindictively orders the young boy, who was sent to deliver the message, to brick himself up alive inside the fortress walls for it to have any chance to be invincible and left standing. The boy, the son of a man who once jilted her, volunteers when told this is the only way to save the wall from destruction. This situation is probably a metaphor for the way the government runs things in the Soviet Union, with the lesson learned is that the wall cannot stop from crumbling when the people are kept ignorant and oppressed, and that martyrdom is a better choice than living without spiritual freedom.

Though acclaimed by critics as a great filmmaker, Paradjanov was imprisoned for most of the ’70s on dubious state charges that ranged from making treasonous surreal films and dealing in illegal art objects and manipulating currencies to engaging in homosexual practices and “incitement to suicide.”After his release in 1978 from a labor camp, Paradjanov was again sent to prison in 1982 on charges of attempted bribery. That Paradjanov upon his release in 1983 would continue to again make films until his death in 1990 from cancer, is perhaps a small miracle. This was the first film Paradjanov made in 15 years. 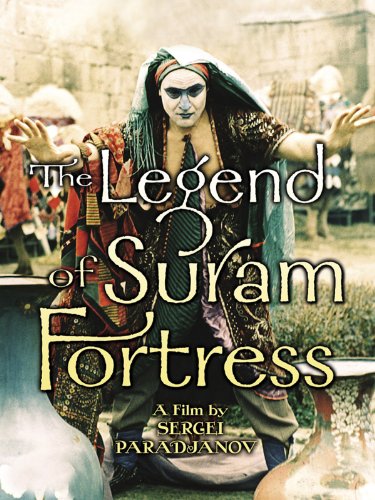