LEFT HAND OF GOD, THE

The Left Hand of God is Alfred Hayes’s version on the book by William E. Barrett; it’s directed without distinction by Edward Dmytryk (“Broken Lance”/”The Caine Mutiny”). It’s set in China in 1947, at a time of civil war and revolution. Gene Tierney, the lead actress, was coming off some bouts with mental illness and had not been working for some time. Studio head Zanuck got the greenlight from Dmytryk and star Bogey that it was ok to have her in the pic. Dmytryk’s wife Jean Porter played the Chinese Mary Yin, who in the early scenes was the girlfriend of Humphrey Bogart’s pilot character Jim Carmody. He’s an American soldier of fortune who, after crashing his plane in China, takes up as an adviser with the ruthless Chinese warlord General Yang (Lee J. Cobb). He’s really under house arrest and makes the best of a bad situation for the last three years. After watching one of the General’s henchman kill an American priest named Peter John O’Shea, Jim splits disguised as that priest. But Yang has issued orders to shoot any deserter. Jim will find his way to a remote mountain village where the Protestant husband and wife missionary team, Beryl (Agnes Moorehead) and Dr. David Sigman (E.G. Marshall), give him shelter even though he acts odd for a priest. Jim keeps up his pose for the villagers as the long-awaited Father O’Shea, conducting services and carrying out all the priestly duties, but he soon falls madly in love with the attractive Catholic mission nurse Anne Scott (Gene Tierney) who works in the hospital that serves the seven outlying villages. It leads the Sigman’s to suggest he see a Protestant minister friend of theirs for counseling. At their meeting, Jim tells him the truth and he follows the stunned minister’s advise to write to the bishop and reveal his real identity. Things come to a head when after Jim courageously acts the part of a priest and gets the locals to once again attend church, General Yang finds him at the missionary. He tells Jim that if he doesn’t come back to him he will burn down the village, which leads to them shooting craps as they make the following wager: if Jim wins, the warlord will leave the villages, the mission and the American intact, but that if he wins, Jim must return with him for five years (these two have thrown the dice before over Jim’s wages).

The film is too clumsily scripted to be convincing in making a noble hero out of the renegade character played by Bogey, who appears to be acting as if he were in a straightjacket–he can’t be priestly chaste or freely romantic with the one he loves. That Bogey has so much sway over the locals must have happened off the screen, because on the screen there’s no such evidence. The only thing provocative about the film is that Bogey successfully masquerades as a man of the cloth, which might indicate anyone as impure as Bogey’s character could fill that role in a left-handed way (which might upset the Catholic Church hierarchy). What the slow-moving and not too entertaining film fails to bring to the table is any suspense, but it tries hard to redeem itself as it shows Bogey go through some heavy soul-searching. The intelligent performances by Agnes Moorehead and E.G. Marshall helped considerably make things more palatable, otherwise it seems too uninspired to count for much. 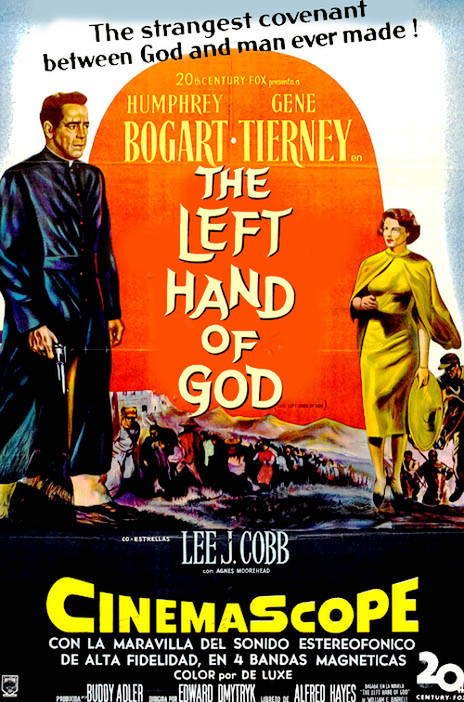