Englishman Michael Winner (“The Stone Killer”/”Scorpio”/’Death Wish”) helms his first Western in this unofficial remake of the 1955 “Man with the Gun,” with the hardnosed Burt Lancaster in the Robert Mitchum role. It’s a traditional Western, shot in Durango, Mexico, that’s influenced by the spaghetti western, as it pours on an excessive amount of violence and gore while never getting satisfactorily to whatever psychological aims it had in mind; such as, to probe how far a man can compromise doing what’s right and whether by not compromising one’s beliefs the end will justify the means.

Dedicated, by-the-book, taciturn, stern and unyielding lawman Jered Maddox (Burt Lancaster) rides into a neighboring town called Sabbath, where he has no jurisdiction, to bring to justice seven cowpokes who went on a drunken spree and accidentally killed an old man in his town of Bannock. Sabbath’s weak-kneed marshal living only on memories when he once was a man, Cotton Ryan (Robert Ryan), refuses to help Maddox, saying the men worked for cattle baron Vincent Bronson (Lee J. Cobb) who supports the town and in return demands loyalty.

The exceptional cast is stuck with clunky dialogue it somehow manages to overcome. Lancaster is solid in his stoic marshal role, Ryan is convincing as the conflicted bought marshal, Cobb as the ruthless villainous corrupt boss tries hard to give his character some breath and not to be one dimensional as he searches his soul for answers and Sheree North is fine as Lancaster’s love interest and one hope of softening his stance. But it’s all for naught. The wannabe thoughtful Western, lacking style and freshness, can’t get away from its bloodbath thrills as Lancaster methodically goes after his prey even as the entire town turns against him–little else matters when all is said and done. 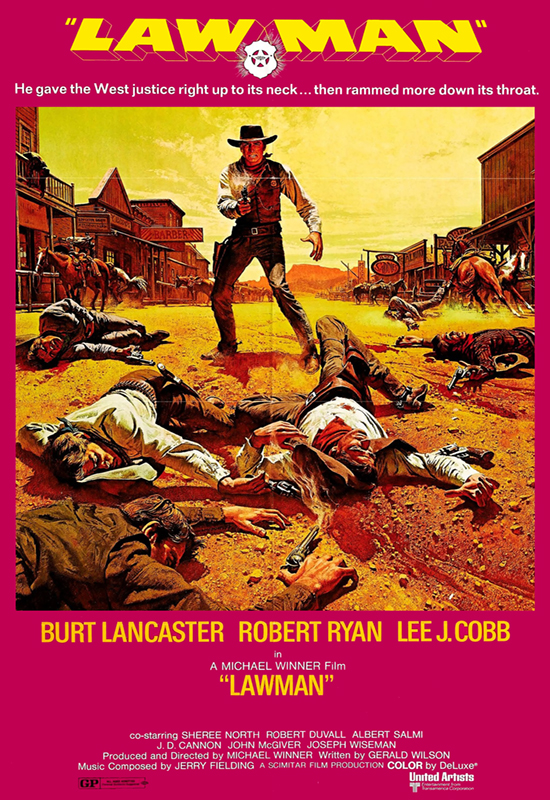