Better than average B Western that salutes democracy. Joseph Kane helms it in a workmanlike manner. It’s based on a story by Scott Pembroke & Joseph F. Poland, with the latter providing the screenplay. The film is set in the 1890s in the Wyoming Territory, where a lawless faction controls the territory by intimidating the voters. Federal agent John Tipton (John Wayne) and his best friend Bridger (Lane Chandler) are sent to the most troublesome spot, Crocket City, and their job is to smoke out who’s the leader of the insurgency and make sure the homesteaders get a chance to vote in the upcoming election to approve statehood.

Tipton befriends settlers just arriving from Virginia, the pompous Major Carter (George ‘Gabby’ Hayes, minus his beard) and his pretty 19-year-old daughter Janet (Ann Rutherford). The Major bought the local newspaper, the Crocket City Blade, sight unseen, and plans to be a crusading editor favoring statehood and law and order. The villain is leading citizen Charles Plummer (Harry Woods), posing as a good citizen who’s in charge of the Committee of Law and Order but who in reality runs the corrupt Wyoming Territory political machine.

When Plummer discovers Bridger is an agent by intercepting the coded telegram he sent, he has him killed by two of his gang. Tipton suspects the telegraph was intercepted and sets a trap to catch the killers and has the sheriff escort them to a Colorado prison. When the Major refuses to back down on his editorials, Plummer orders henchman Steele (Al Bridge) to kill him. Janet refuses to leave and takes over running the paper with the help of her black servant Moses (red ‘Snowflake’ Toones). The only other black in town is cleaning lady Mandy Loy (Etta McDaniel), who becomes the romantic interest of Moses. Some may be offended by their stereotyped roles; they both serve in comic relief roles.

On the day of the election the villains stop the homesteaders from voting but Tipton leads a bunch of agents to crush the outlaws. It results in all the baddies brought to justice, Wyoming becoming a state and Wayne gets the girl. 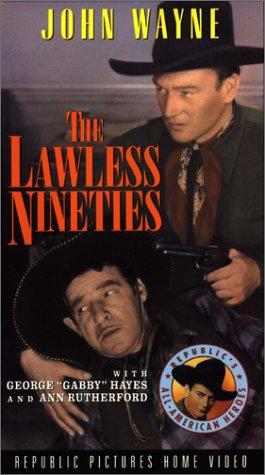