THE LAW IN THESE PARTS (SHILTON HA CHOK)

“Intriguingly asks if justice can be served in the occupied territories given the current system of law administered by Israel for Palestinians.“

The no-nonsense, starkly filmed and thoughtful documentary by creative Israeli filmmaker Ra’anan Alexandrowicz (“Martin”/”The Inner Tour”/”James’ Journey to Jerusalem”), intriguingly asks if justice can be served in the occupied territories given the current system of law administered by Israel for the Palestinians. The pic, divided into five chapters, tries to reaffirm if Israel is indeed founded on democratic principles and if the temporary laws, now seemingly permanent, do justice to the long occupation and the problem of the Jewish settlers. The legal framework behind the laws of the occupied territories is thoroughly explored with archival footage and interviews with the 9 retired judges involved in the legal process, as it reviews the military legal system established for the occupied Palestine territories following the 1967 Six-Day War and attempts no other way of looking at the Israeli-Arab conflict.

The complex documentary, much like a law school seminar, is of interest mainly to a limited audience of the chosen few interested in the nuances of the Palestinian problem. For those willing to sit through the slow-moving and somewhat dry law school-like lecture, it offers the chance to better understand the conflict through the intense interviews with the legal types who administered and justified the occupation. It results in a compelling indictment of Israel’s occupation of the West Bank and Gaza Strip, which might not please all those concerned. But it does let us see how the situation is festering, and how it has gotten so much worse over the years. Revelations that were too obvious for me to get too excited about its damning pronouncement.

Those interviewed sit at a desk on a raised platform and are asked difficult questions by off–screen interviewer Alexandrowicz, while the large green-screen behind them will offer frequent projections of Palestinians arrested and other such inflammatory incidents. If you can sit through this odd way of making a documentary then the provocative human rights film, whose legalese seems muddled, should help the open-minded viewer to further assess the difficult occupation situation. After viewing the self-indulgent and self-questioning documentary you will at least understand why the Israelis make the Palestinians live under the new laws and not have them live by the laws in place for Israelis, as it’s clear the Israelis don’t want them in the future to become citizens. It’s not the kind of film you can easily dismiss or say wholeheartedly that you support, which doesn’t make it either a bad or great film–but it’s a relevant one.

It won the Best Documentary Award at the Sundance Film Festival. 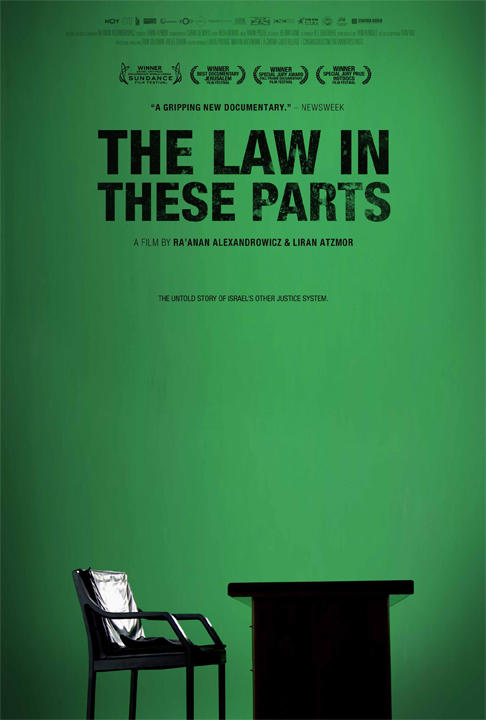