Cedric Klapisch’s (“Un Air de Famille”/”When The Cat’s Away …”) frothy ensemble comedy/romance flick, L’Auberge Espagnole (its literal translation is “The Spanish Inn,” while in slang it can be likened to the term “Euro-pudding”), explores relationships and coming of age themes among a group of twentysomethings studying abroad in Barcelona in a foreign exchange program called Erasmus (the 16th century writer, humanist and globe-trotter who became one of the leading thinkers of the Renaissance and envisioned a future of different countries living in peace together). It’s seen through the eyes of the serious-minded bland 25-year-old Xavier (Romain Duris), a Parisian who sadly leaves his divorced hippie mom and possessive girlfriend Martine to study economics and learn Spanish for a year as a career move to keep in step with the European Union as advised by his knowing father, where he’s promised by his father’s friends in high places a good office job after he completes his studies.

In Barcelona, Xavier shares a messy apartment with six other students with different personalities and from various European countries such as England (the uptight Wendy, who will fall for an American street musician but still remain bound to her steady boyfriend back home), Italy (the amiable stoner Alessandro), Belgium (the French-speaking lesbian Isabelle, who teaches Xavier how to seduce a woman with some heavy-handed caressing moves), Spain (Soledad, who is having an affair with her Dane roommate Lars), and Germany (Tobias, who is stereotyped as too Germanic about neatness, following rules and his anal rigidity). Xavier also befriends on the plane ride over an openly friendly French neurosurgeon named Jean-Michel and his old-fashioned bride of 15-days Anne Sophie. After months of keeping the sexually repressed blonde beauty company in tours around the city while her workaholic hubby is at the hospital, Xavier will begin a schoolboy fling with her that suddenly peters out when they can’t get past the good sex and form a “hip” relationship.

The film moves briskly along in its inevitable sitcom doings offering hardly any surprises as the students enter various relationships, budding romances, experiments with drugs, arguments over such things as household duties, battle cultural and language problems, and ultimately bond together despite all their differences and the chaos of their living arrangement (there’s no common language). Klapisch shoots a visually stunning film filled with special effects as he plays with the camera by speeding up the action at times to fast-forward motion, uses animated maps and superimposed images. Sometimes it worked and the filmmaker caught the essence of what it’s like living in a foreign country when you don’t know the language and the customs, but at other times the plot line broke down and the characters became wearisome caricatures and unbearable stereotypes. It moves to an upbeat ending that comes with a sermon about always following your dreams (ugh!). This unneeded message comes after Xavier returns to Paris from his successful year abroad and flees his promised bureaucratic gig to become a writer. We are supposed to believe that his year abroad loosened him up so much that his suppressed desire from childhood was rekindled in Barcelona. If that was so, I certainly didn’t see any indication of that while he was rambling around that town without a literary thought in his empty head.

In its warm and fuzzy feelings for communal living, it reminded me of Lukas Moodysson’s Together–a similarly derived sentimental trifle. 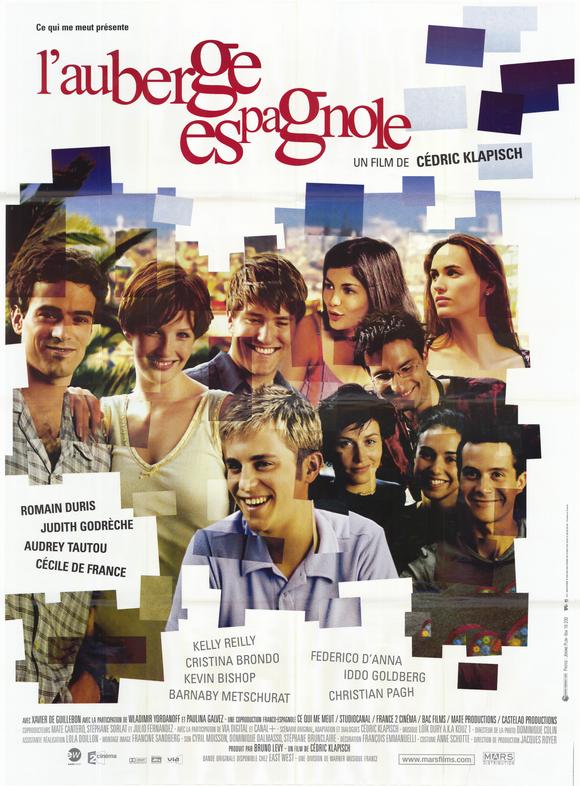