Martin Scorsese’s (“Taxi Driver”) faithful adaptation of Nikos Kazantzakis’s controversial 1951 novel results in a thought-provoking film even though it seems stilted at times. Paul Schrader is the screenwriter. It’s superbly acted, deeply felt as a drama and beautifully photographed, but suffers from banal dialogue and an unsuccessful attempt to bring a modern viewpoint to the crucifixion. Though Scorsese received much grief for this humanistic and personal presentation of a self-doubting Jesus on the cross, it’s nevertheless neither blasphemous nor offensive. The controversy mostly stemmed from right-wing church groups who objected to the sex scene with Mary Magdalene (Barbara Hershey), which occurs as an hallucination experienced by Jesus as he’s being tortured on the cross. These bigots should be proud of themselves that they got the film banned in certain parts of the world (they should shake hands with the Muslim fundamentalists as birds of the same feather).

Kazantzakis’s Jesus is torn from inner turmoil over his all too human desires (like sex) and divine destiny calling (hearing God speak to him). There are powerful and unforgettable moments in this ambitious film, a film graced with provocative ideas that will cause friction with the purists not able to see Jesus interpreted in this revisionist modern way as someone who is more human than presented in the Bible. It was filmed in Marrakech, Morocco. Peter Gabriel provides a moving score.

Blue-eyed, blond Willem Dafoe plays Jesus Christ, and speaks with a New York accent as do most of the cast. It opens with a tormented Jesus hearing disturbing voices in his head (unsure if they come from God or Lucifer) as he’s a carpenter making crosses for the Romans that ironically will be used against the Jews and eventually even him. Jesus says, he does this to make God hate Him: “God loves Me and I can’t stand the pain.” This depiction becomes one of the problems Scorsese has, since Jesus is debunked as a saintly figure and the traditionalists might not forgive him for painting their Savior in such an unsympathetic light.

The main part of the story depicts a questioning Jesus who eventually accepts his divine destiny and becomes a preacher for the truth and accepts his crucifixion as part of his deal with God. It shows Judas (Harvey Keitel) as someone who was manipulated into betraying Christ so as to fulfill his destiny as envisioned. Rocker David Bowie brilliantly plays Pontius Pilate in a subdued manner; his scenes gives an excellent account of how it was back then in Roman times (just think of how Mel Gibson’s “Passion” film is so filled with hatred and anti-Semitic overtones, and one might appreciate Scorsese’s more spiritual searching presentation all the more).

Scorsese tacks on in the last 40 or so minutes an imaginative sequence in which Jesus is taken from the cross by an angel who tempts him with a conventional life as a married man with a family. It’s the part that worked best for me.

This presentation was accepted by many biblical scholars and some of the more liberal clerics. Its greatest failure is that Christ seems to be reduced to nothing special (even the miracles seem flat), becoming more like a modern day New Yorker going through a compelling trippy experience that he goes along with rather than admit he might be in over his head. This certainly gives Scorsese’s Jesus a different feel than the political one the Marxist Pasolini gave him in The Gospel According to St. Matthew or the unassailable divine one presented in the Bible. Be that as it may, this low-budget biblical spectacle at a $7 million budget, is one of the more daring, intense and hypnotic Bible films ever made and Scorsese proves once again that he’s one of the more innovative and intelligent filmmakers of modern times. 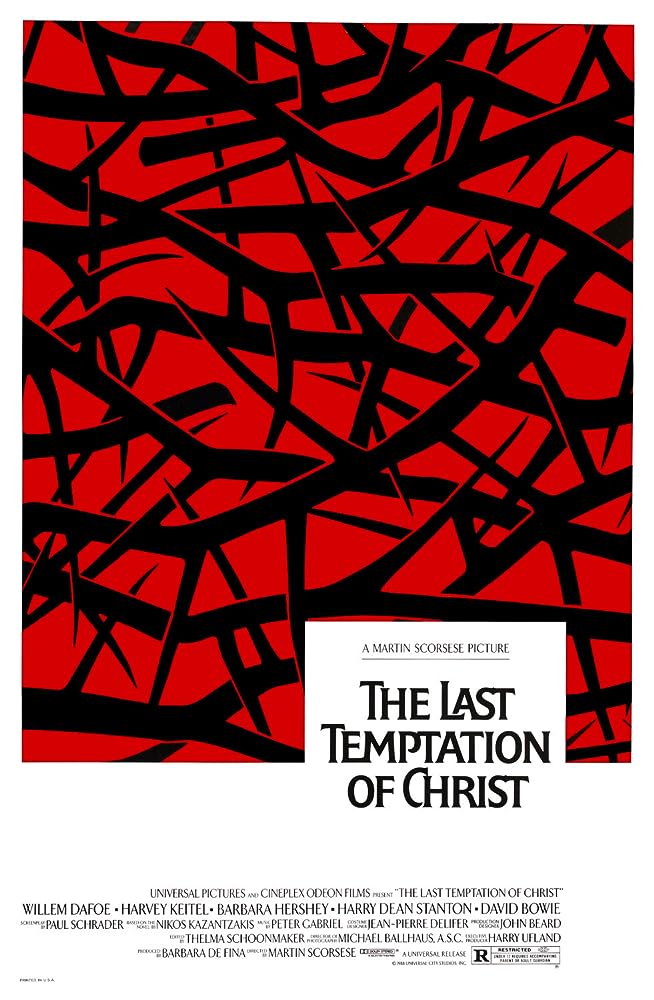