The Australian director/writer Fred Schepisi brings Graham Swift’s Booker Prize-winning novel “Last Orders” to the screen with much pause and feeling. This compelling drama is about four mourners, the three long-time friends and the deceased’s son, obeying the last request of the departed charismatic London butcher Jack Dodds (Caine) to have his cremated ashes tossed out to sea. These cockneys journey with the urn from London in style in Jack’s adopted son Vince’s (Winstone) borrowed showroom Mercedes (Vince owns the showroom and broke his dad’s heart by not going into the butcher business with him), as they make their way through the lush Kent countryside, assorted pubs, and even Canterbury Cathedral. The friends are: the one whiskey drinker among the ale drinkers, the lean and proper funeral director Vic (Courtenay); the embittered ex-boxer and now greengrocer, the pudgy Lenny (Hemmings); and, Jack’s closest buddy, the lucky horse playing gambler, someone he’s known since their days together in World War 11, someone his family now considers as their uncle, Ray (Hoskins).

This is a character-driven tale about four shopkeepers that through cross-cutting between flashbacks and the present allows each mourner a chance to relish in nostalgia, the cherished personal memories about each one’s relationship with the deceased, and the loves, hopes and disappointments life has brought to these ordinary Brits. It’s a film with a deceptively endearing narrative, but its real power lies in the simple truths it reveals about the ordinary lives of these ordinary people through its characterizations by the ensemble cast. This method of storytelling packs such an emotional wallop, especially given this all-star cast can really act. Helen Mirren also has a strong role as the devoted wife of Jack, Amy. She’s burdened in life by their daughter June, who was born mentally incapacitated and has spent her whole life in a mental institution not recognizing her mom. Jack has abandoned her and never visited, but Amy continues to visit despite the frustration of seeing her daughter grow into a middle-age woman without any hope of improving. She chooses to visit her daughter rather than go with the men to disperse the ashes, as the memories of the seaside resort are still so powerfully with her — that’s where she met Jack as a youngster while they were picking hops and fell in love.

On this last pilgrimage, Jack is literally in a box packed by the caring undertaker. The ashes are in the urn as the four men meet in the pub they regularly hangout in and start on their way to the seaside resort of Margate. Jack hoped to retire there in a bungalow with Amy, and since he got into debt — has Ray try to win at the races in order to provide his soon-to-be widow with enough money to not want for anything. Each character has a chance to see what they care to remember about the past, as their imperfect lives are spotted with joys and sorrows. What ill-will they might have had and their grudges are also brought to light during this last journey, in a very graceful, sad and amusing manner.

All the characters shine and the direction is intelligently accomplished. Watching this story develop is like having a few ales at your favorite pub and loosening up as the evening wears on, as the feelings of camaraderie and warmth become entrancing. 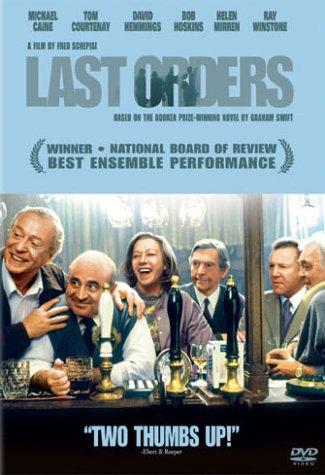