THE LAST CHALLENGE (aka: THE PISTOLERO OF RED RIVER)

“It’s watchable only because Glenn Ford is always watchable.”

This is the final film of the prolific, veteran 72-year-old film-maker of some 179 feature films, Richard Thorpe (“Night Must Fall”/”Malaya”/”Ivanhoe”). It’s a leaden routine Western, whose theme is the familiar one of a gunslinger yearning to retire but must fight one last gun duel. It’s watchable only because Glenn Ford is always watchable.The film is set in the Old West, in the dusty Southwestern town of Suwora, in 1877.The weak script is byJohn Sherry and Robert Emmett Ginna.It’s based on the novel byAlbert Maltz.

For the last ten years the world-weary middle-agedDan Blaine (Glenn Ford)has been the marshal inSuwora, and has the rep as “The fastest draw in the West.’ Blaine as a youth was a wild one, who served a five year prison stretch for bank robbery. Everyone in town knows about his past and approves. The locals take pride in the efficient way he keeps the peace. Fancy-dressed saloon-keeper Lisa Denton (Angie Dickinson) is madly in love with Blaine and the two plan to go away together in the near future, with Blaine retiring. Things get tense when fast draw Lot McGuire (Chad Everett), a punky youth, states he came to town with the sole purpose of killing Blaine and has no reason except he wants to earn the rep as the man who killed the famous gunslinger marshal.

The tired story never gains any energy as it slowly drags its feet over several uninteresting incidents until the final showdown. There’s one rather obnoxious sequence whereby the marshal gets Indian attacker (Royal Dano) and his fellow Indians drunk to stop their attack, as he voices the sentiment ‘that a drunk Indian is better than a dead anybody.’ 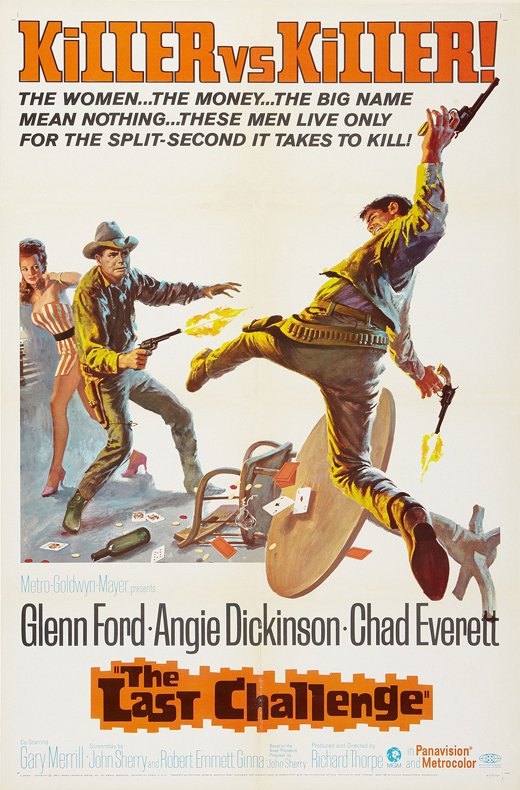 WE HAVE ALWAYS LIVED IN THE CASTLE