LARS AND THE REAL GIRL

A delusional but sweet psychological drama about a young man treated for a bizarre delusional disorder with unconditional love by a small-town family doctor-psychologist (Patricia Clarkson) in an unspecified Midwestern tight-knit Christian community (It was shot in various Northern Ontario towns). It’s a whimsical pic that forgets about farce or anything lurid, and instead plays it straight as dramedy. That it stuck to its guns as an offbeat arthouse fantasy message film without becoming cartoonishly absurd was the thing I most admired about it even though, at the same time, that was what made it so tiresome and disingenuous and left me feeling this was more about Hollywood’s bogus take on reality than an actual depiction of real-life. If you can take the heavy-handed whimsical scenario forced down your throat then you have a stronger stomach than I do.

It’s directed by Craig Gillespie (“Mr. Woodcock”) and is based on a script by Nancy Oliver (“Six Feet Under”) that wears its heart on its sleeve by showing its compassion. A virtue that can’t be argued with, nevertheless it’s highly questionable if such a prescribed therapy realistically could be so completely effective in the light of such overt odd behavior on display. At its best, I found the cornball scenario agreeable on its claims about the powers of love but more than a bit strained for one to believe that’s all it takes is a little love to conquer everything. Such sugary solutions as treatment programs for the mentally ill might work in pop music scene for its bubble-gum songs, but not in real therapy.

The unstable, gentle and socially awkward loner named Lars (Ryan Gosling) and his stable married older brother Gus (Paul Schneider) are the grown children of a neglectful father who died recently and a caring mother who died giving birth to Lars. Gus feels guilty he left his brother alone with dad and fled. He has returned after his dad’s death with his loving wife Karin (Emily Mortimer), and works as a clerk in a hardware store. Lars, who prefers being alone and can’t stand being touched, moved into the garage despite his brother and pregnant homemaker sister-in-law asking him to live in dad’s old house.

On his computer related office job, Lars learns about custom-made life-sized plastic dolls sold on the Internet from a co-worker and orders one. He smartly dresses the doll, carries her around in a wheelchair and names her Bianca, and tells everyone that’s his girlfriend. Sent to the therapist, the plan is that Gus and Karin and everyone in the community go along with Bianca being real. The idea is that the therapist regularly treats Bianca for a sickly condition and thereby has office visit chats with Lars about her health, with the hope that some day Lars will come to his senses and smell the coffee. It’s a one-joke film that went on for too long and has very little to say that’s worth squat. There’s even more absurdity tacked on, whereby an attractive functioning new worker at the office, Margo (Kelli Garner), repeatedly comes onto our boy even though she knows he’s as nutty as a fruit cake. Some things just can’t be explained, like the hardup nature of her undeveloped character that was conveniently used as a plot point and added to the film’s phony arc. 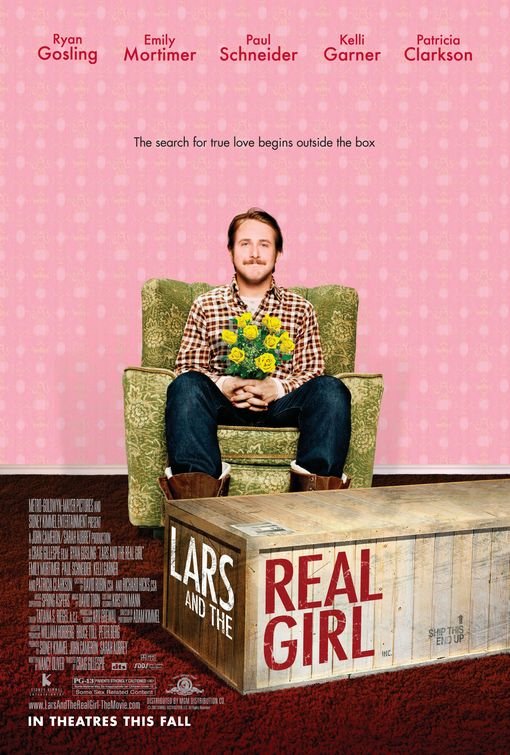