The daring sensual satire on life behind the Iron Curtain was directed by Jiri Menzel (“Closely Watched Trains”/”My Sweet Little Village”/”Pearls of the Deep”). It was ready to be released in 1969 but was banned by the uptight Red authorities in Czechoslovakia after their revolt and the Soviet invasion of 1968-69 and not released until some 21 years later. Cowriter Bohumil Hrabal, with Menzel, based the screenplay on his short-story collection “Advertisement for a House I Do Not Want to Live in Anymore.”

Bourgeois dissidents, whose actions by the communist authorities are deemed “counter-revolutionary,” are relocated to a 1950’s junkyard/labor camp for ‘re-education’ in the town of Kladno. The men in the group include a literature professor (Vladimir Brodsky) not willing to destroy his decadent Western literature collection, a saxophonist (Evzen Jegorov) whose instrument was considered offensive to the state because it was an example of bourgeois decadence and a public prosecutor(Leos Sucharipa) who maintained that a defendant ought to be allowed to plead his case.

In this bleak setting the men were not allowed contact with the women prisoners and were kept separated by a mesh fence that divided the workplace yard. The attempts by the men at romantic contact became the gist of the film. One of the more lively romances focuses on the Chaplin-like Pavel (Václav Neckar), the young prisoner, a Seventh-Day Adventist, whose imprisonment came about when he refused to work as a cook on the Sabbath. Pavel falls in love with Jitka (Jitka Zelenohorska), a pretty female prisoner, and we follow their comical love affair set among the scraps of metal. The bureaucratic sense of futility reaches a point of no return when Pavel and Jitka wind up getting married on the special day they have chosen, as a zealous party official (Rudolf Hrusinsky) arranges for the bride’s grandmother to serve as her proxy.

Menzel is just as much concerned with the male misadventures with the women in the adjoining camp as he is with the harsh injustice of the system. Those party officials and prison guards doing their duty are pitied by the filmmaker as also victims of the state, because the Red leaders have also attempted to stifle their human spirit. It turns to whimsy more than it does to biting satire, as it’s probably more sunny a pic than one would expect considering the tragic story it’s telling. Though its Czech gallows humor didn’t translate well to this American, its indictment of the inhuman communist regime is never doubted and well-worth tuning into for how this group of prisoners bravely dealt with such an oppressive regime. 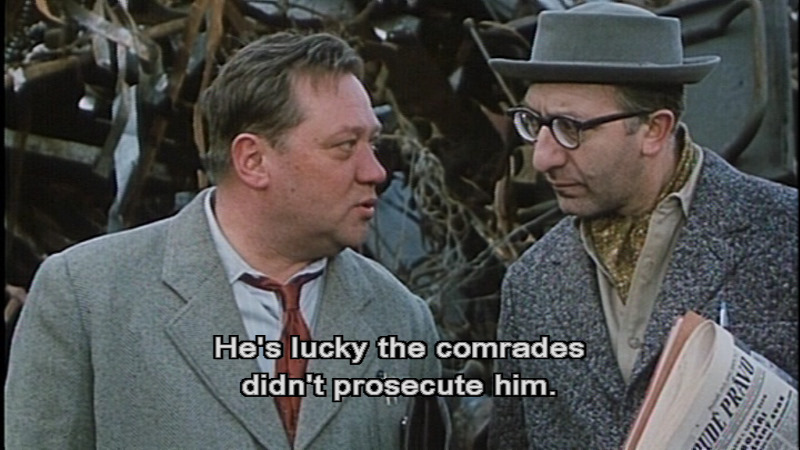