“A legendary landmark film that had a great influence on cinema.”

Inspired by the 1891 novel of Émile Zola, that it updates to fit the times. It’s the last and greatest of French director Marcel L’Herbier‘s (“Rasputin”/”The Cheat”/”Sacrifice d’honneur“)silent films, that uses artistic Art Deco sets and innovatively uses a mobile camera.A legendary landmark film that had a great influence on cinema. The lost film was restored by Centre National de la Cinématogaphie and began circulating again in the 1970s after not being seen for decades.

L’Argent is a ripping big-budget (cost 4 million dollars) ambitious film on the greed and corruption of international big business taking place in the Paris stock exchange (Bourse), whose big-time players are condemned as evil men and whose bad influence rubs off on others trying to take shortcuts to reach wealth. It follows a dense but sophisticated plot that is mystified and shows how corrupting the pursuit of money can be.

The imposing fearsome banker Nicolas Saccard (Pierre Alcover) is the second-fiddle nouveau riche rival to the master old-timer banker and oil tycoon Alphonse Gunderman (Alfred Abel), as the two capitalists fight for control of the world. These ruthless men are schemers and act in unscrupulous ways to crush those who stand in their way and are always trying to find ways to out-shine the other and possess more wealth. Mary Glory plays an ambitious innocent unwittingly used by Saccard to manipulate her pilot/inventor husband (Jacques Hamelin) to work for the scoundrel in a stock fraud scheme, as hubby in a publicity stunt flies across the Atlantic to French Guyana where they are drilling for oil in sites owned by the financier speculator. Saccard is romantically interested in the exploited pilot’s wife and believes he’s sending the hero pilot on a mission he will not survive. Brigitte Helm is the the sultry aristocratic femme fatale.

Money is what motivates every character in the film and is spoken of by Zola as ‘the dung on which life thrives.’ 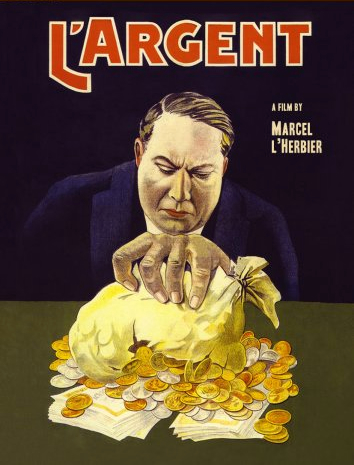